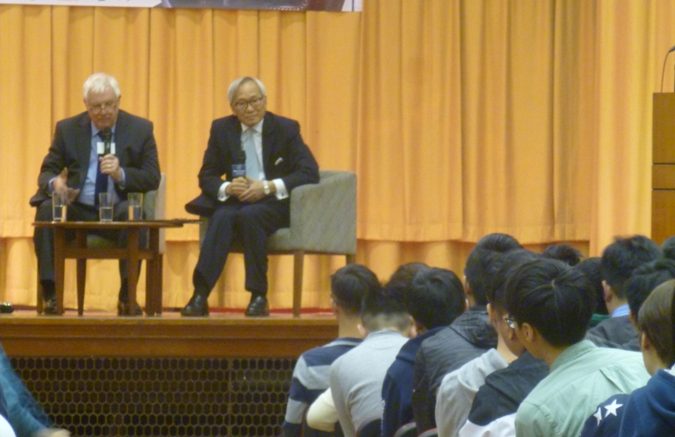 Believe it or not. Last governor Lord Patten, known for his eloquence in speaking and intelligence in thinking, admitted he was tongue-tight as he addressed students at the University of Hong Kong on Tuesday.

He said he felt more ease speaking at Lok Yew Hall without a gown he had to do so when he was Chancellor of the university. But he made no secret his unease and bewilderment about what he should say to a young-looking crowd, many of whom were too young to witness the “happiest years” in his life (1992-1997) when he was the master of the Government House.

Paying a visit to the city the first time after what he called the Umbrella Movement in 2014, Lord Patten felt the deepening air of jitters in the society and, more worrying, the depth of frustrations and a sense of loss in direction among the young people.

A seasoned politician for half a century, he needs no reminders of the complexities and sensitivity of the city’s post-Occupy political scene, which saw the emergence of pro-independence activism and its alignment, at least some kinds of, with the trend of “localism.”

Beijing’s fears about the growth of separatism have been aggravated by the oath-taking antics of Youngspiration’s Sixtus Baggio Leung Chung-yan and Yau Wai-ching, who advocated the notion of “Hong Kong nation” in their oaths. It led to a recent Basic Law interpretation by the National People’s Congress Standing Committee, its fifth after 1997.

And at a time when the popularity of Chief Executive Leung Chun-ying stayed at a low level and the 2017 chief executive election nearing, the last thing he wanted was to be dragged into the unholy alliance of advocates for ABC, or Anyone But C Y.

During his visit, he stayed clear of commenting directly on the performance and re-election bid of Leung and the NPC’s Basic Law interpretation.

His reticence on Leung and the latest strategy of the Beijing leadership towards Hong Kong is in stark contrast with his unreserved views on the Occupy and the advocacy of independence and self-determination.

Depending on who you ask, the verdict of the 79-day Occupy movement could be ranged from a breach of laws at a massive scale to a lost battle over a democratic universal suffrage system in electing the chief executive. The lingering frustrations over the fruitless protest have sown the seeds of the fierce clash between police and protests in Mong Kok during the Lunar New Year.

The feel-good sentiments and sense of pride among the populace over the orderly, peaceful and civilised manner of the Occupy at its early had been displaced by doubts and negative mood about the civil disobedient act as it dragged on.

The feeling of failure and futility in the aftermath of the Occupy Central has prevailed among the pan-democrats and their supporters in the past two years. It has given a fillip to the advocacy for independence and self-determination.

The key message Lord Patten was eagerly keen to convey in his visit was that independence and self-determination are a “dead wrong’ direction for the city, which leads to nowhere and, worse, further away from the ultimate destination of democracy.

He was hoping to send a belated reminder to fellow Hongkongers, in particular the young people, not to surrender the “moral high ground” they have gained from the Occupy protest and, one the basis of which, to keep fighting for democracy.

To him, democracy is and has always been the best way to protect the Hong Kong systems under the tenet of “one country,” not independence. Calls for independence and self-determination risks doing the opposite, needlessly provoking Beijing and putting the city’s freewheeling lifestyles in danger.

He warned the democratic movement would lose support from the society and the international community if it was bundled with the pursuit of independence.

Lord Patten paid a huge price in return for the bad name of “sinner of a thousand years” by late senior Chinese official Lu Ping for a “too-little-too-late” democratic election blueprint during his five-year rule.

He lamented the pace of democracy has been too slow since the handover, but knew well he was “history, the past” and that tomorrow belongs to the young people.

Tee best he could do is to convince them of the imperative of a right blend of realism and idealism and that the wisdom of a yesterday’s man is still relevant and makes some sense in Hong Kong today and tomorrow.

Be the first to comment on "Patten back to the future"