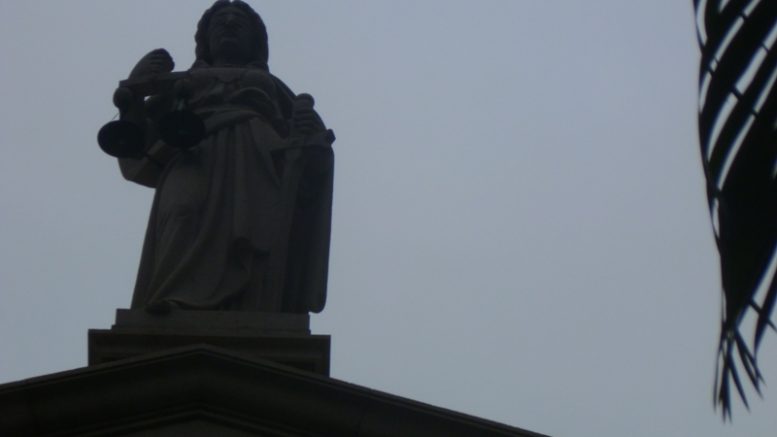 What price to pay for ousting two localist legislators? There are fears about Hong Kong's judicial independence if the Government seeks Beijing's interpretation of the Basic Law to stop Leung Chung-hang and Yau Wai-ching from retaking their oath if it loses the court fight on Thursday.

In a show of his “single-tasking” work approach, Chief Executive Leung Chun-ying cancelled a trip to Beijing scheduled this week to focus on his Number One task, or more accurately, enemies, namely the two Youngspiration legislators-elect, Sixtus Baggio Leung Chung-hang and Yau Wai-ching.

Following a surprise announcement of a last-minute change of his travel plan Monday night, he revealed on Tuesday he would be staying in Hong Kong to handle a judicial review he has filed to stop the pair from swearing in again. For the first time, he did not rule out the possibility of asking the Chinese National People’s Congress Standing Committee to interpret the Basic Law for that purpose.

Two days before a High Court is due to hear the arguments before delivering a verdict, Leung cannot wait to make it clear there can only be one result whatever the court rules. Leung and Yau must not be allowed to take another oath to be given their seats in the Legislative Council Chamber.

The writing is on the wall.

As if the Government remains committed to judicial independence by giving respect to their ruling, Secretary for Justice Rimsky Yuen Kwok-keung stuck to his view that the row “could and should” be resolved through the city’s judicial system.

They are nice words from Yuen the “good guy.”

The naked truth Leung Chun-ying, the “bad guy”, has laid bare hours before Yuen spoke was that the Government looks certain to ask the NPC standing body to overturn the High Court ruling if it is unfavourable to them.

Retired judge Woo Kwok-hing has described as an act that “does not look good” when he commented on the unprecedented legal action taken by Leung to bring Legco President Andrew Leung Kwan-yuen to court over his decision to give Leung and Yau a second chance of swearing in after he ruled their first attempt that contained offensive words was invalid.

The blatant move by Leung to pave the way for the NPC Standing Committee to step in cannot be an uglier political act that runs the risk of inflicting fresh wounds in Hong Kong’s independent judiciary and the high degree of autonomy.

Michael Tien Puk-sun, a vice chairman of the pro-establishment New People’s Party, said Leung’s move was an attempt to put pressure on the court. He warned it would deal a body blow to the “one country, two systems” policy. Another pro-establishment lawmaker Paul Tse Wai-chun hinted that Leung was keen to score political points from the oath-taking controversy as the chief executive election heated up.

A blow to ‘one country, two systems’

Though widely tipped to seek re-election, Leung has refused to confirm his plan and when he would make a decision.

He said last week he was focusing on one task in the next few months, referring to the 2017 Policy Address and the related Budget. He asked his team members to do the same, without naming Financial Secretary John Tsang Chun-wah, who is said to have told Beijing he wants to quit to join the CE election.

Nothing could be further from the truth. While pulling out all stops to stop the Youngspiration pair from taking the Legco seats they won in the balloting last month, Leung has kicked off his re-election task on two fronts.

First, he wrote an article to defend his achievements on a wide range of policy areas covering land and housing, anti-poverty and economic development.

Secondly, he led the crusade against the two young localists for their “mispronunciation” of the word “China” as “Chee-na” and the “People’s Republic” as “People’s Refxxxing” with a sinister motive.

The miscalculation and misjudgment of the pair over the potential dire consequences of playing fire with those politically-sensitive words have provided a godsend gift for Leung to show his loyalty to the ruling Communist Party by killing off the pair.

By acting tough on the localists now being branded as independence advocates at all cost, Leung sought to impress Beijing leaders pro-independence activism in the city would be nipped in the bud before it could “converge” with separatists in Taiwan, Xinjiang and Tibet as some pro-Beijing figures have warned.

Words from the pro-establishment circle were that Leung’s chance of re-election was given a big boost, thanks to the Youngspiration pair.

Leung has cast doubts last week about whether those “pushing for … independence stop what they are doing… (and) those insulting their own country shut up” if there is a new leader.

A similar question can be asked: will those who promote independence and “insult” China shut up if the two localists are being banned from taking their Legco seats.

If the answer to Leung’s question is no, the second cannot be a yes.

Any changes will be for the worse. Any brutal axing of the localist pair is poised to fan the growth of localism and pro-independence thinking and, worse, cause serious damage to “one country, two systems.”

Who has the last laugh?

Be the first to comment on "Who has the last laugh in oath-taking row?"