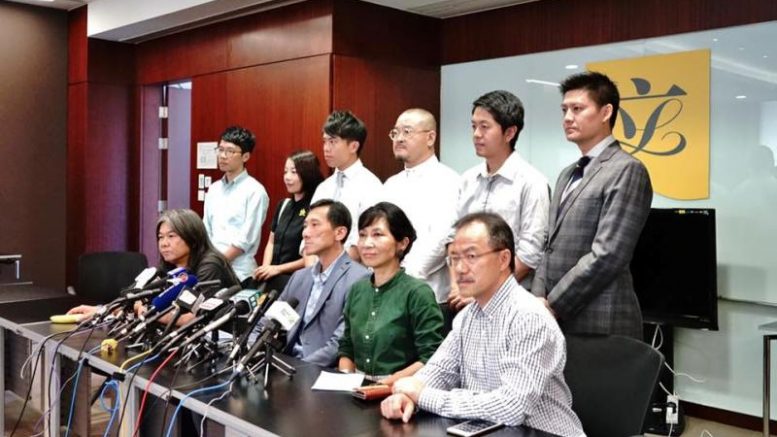 Pan-democrats are rethinking the idea of fielding their own candidates to contest the 2017 chief executive election.

To run or not to run. This is the question the pan-democratic/anti-establishment camp appears to have started revisiting as questions are raised on the wisdom of not to field a candidate in the 2017 chief executive election.

The Hong Kong 01, an online media which also publishes a weekly newspaper, reported that the Civic Party might consider fielding a candidate to vie for the top post following a re-assessment of the latest political developments.

Major pan-democrat political parties including the Democratic Party and the Civic Party have earlier reached a broad consensus that they would not contest the election. Instead, they want to play the role of king-maker.

Confident of grabbing a total of 250 to 300 votes in the 1,200-member Election Committee, they believe that could enable them to make a difference in the election results if they cast their votes wisely.

The first line of argument is that the pan-democrats will have to take the risk of any missteps of their preferred candidate, say, finance chief John Tsang Chun-wah, in the next years if they put their bet on him and that he does get the post but does a poor job.

Secondly, the advocacy for ABC, or “Anyone But C Y”, in pan-democrats’ CE election game plan, will become meaningless if Beijing decides to dump Leung. (Who says that will not happen?)

Thirdly, there is no reason for the pan-democrats not to run if Beijing allows only one candidate from the pro-establishment to contest the post.

The report quoted the party’s Alan Leong Kah-kit as saying the pan-democrats should prepare for different scenarios. The report said one possible candidate was party chairwoman Audrey Eu Yuet-mee. His party colleague, Dennis Kwok, who represents the legal functional constituency in the new legislature, has made a similar point and argument earlier. Eu denied yesterday they would put forward a candidate.

Signs of a divide within the pan-democratic camp over their game plan in the CE race have emerged as the election scene remains hazy. Although the election scheduled for March 26 is still six months to go, none of the political heavyweights tipped as favourites has announced their election plan.

Chief Executive Leung Chun-ying, who was quoted by the South China Morning Post as saying earlier he would announce his decision after the Legislative Council election, has continued to keep his foes and friends guessing. (His office has said later he was misunderstood by the newspaper.)

His likely main rival, John Tsang, stuck to his line of “ditto” when asked. Based on his previous remarks, that could mean he was not interested in running or he would run if doing so could serve Hong Kong well.

As the favourites kept their cards close to their chest, at least two core supporters of Leung could not wait.

Hang Lung Properties chairman Ronnie Chan declared his support for Leung vying for his second term last week. Cheung Chi-kwong, Executive Council member, hailed Leung would be the best person for the job if that required someone with “steel-like will” and “premordial energy (洪荒之力)”.

Holden Chow Ho-ding, a newly-elected legislator representing DAB, has become the first from the pro-establishment flagship to back Leung’s re-election.

In a related development, Leung gave a 20-minute talk, or rather defence, of his record in housing, at a ceremony of the Bauhinia Foundation, an independent think-tank, last week. He claimed success in putting housing back on the right track, citing the number of new flats available to the market in the past four years, among others.

Although there are no signs of any decision made by Beijing on the chief executive race, preparations by the possible candidates and their allies have become more apparent.

It is not difficult to understand why the pan-democrats, which already faced with fragmentation, may fear talk about fielding a candidate risks further splitting the camp.

But there are clear merits of joining the fray to win the hearts and minds of people with an agenda of how Hong Kong can become a better place to live.

Tactically and politically, it would be sensible and wise for the pan-democrats to keep their options open and Beijing, Leung and the pro-establishment camp guessing.