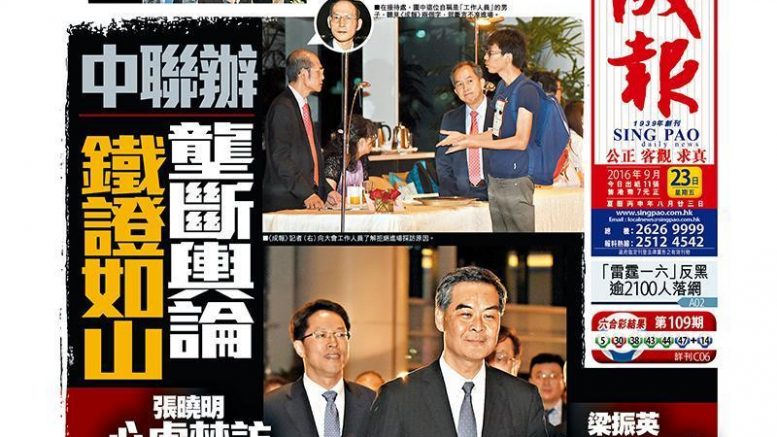 Last governor Chris Patten bade farewell to Hong Kong with one anxiety. “My anxiety is this: not that this community’s autonomy would be usurped by Peking, but that it could be given away bit by bit by some people in Hong Kong,” he said in his swansong policy address delivered in October, 1996.

20 years on, Patten’s anxiety seems to have loomed in the former British colony.

The recent string of comments by the city’s ruling elites, which gives justification to the Liaison Office’s meddling with Hong Kong’s election and functioning of the legislature, has proved Patten’s fears are not unfounded.

But if Patten found no surprise about the curbs on autonomy by “some people in Hong Kong,’ the air of eerie silence in the community over the growing interference of the Central Government’s representative office with the city’s domestic affairs would perhaps intrigue and frighten Patten even more.

Hongkongers seem to have resigned to the reality that Beijing’s breach of its promise of autonomous rule for Hong Kong is just a matter of time. Increasingly, the line of high degree of autonomy given to the SAR has become increasingly blurred.

On Saturday, constitutional and mainland affairs minister Raymond Tam Chi-yuen said any institutions including the Liaison Office could “forge contacts broadly with different sectors” of the society on issues including the Legislative Council elections.

Tam was asked to comment on claims that officials from the Liaison Office had interfered with the city’s election, including lobbying against some candidates for them to drop out to avoid infighting within the pro-establishment camp.

Last week, head of the Liaison Office’s legal affairs department Wang Zhenmin refrained from commenting on the allegation of their interference. Instead, he dropped hints that there are legitimate reasons for them to be concerned about the election and do what they believe to be right and are entitled to do.

Liaison office has a say in election, Legco President

Two leading pro-establishment legislators-elect, namely Starry Lee Wai-king of the DAB and Regina Ip Lau Suk-yee of the New People’s Party revealed Liaison office officials have sought their views about the race for the post of Legco President. The mainland officials are said to be keen to know who will replace the outgoing President Tsang Yok-sing as the next Legco chief.

Being the eyes and ears of Beijing in Hong Kong, the Liaison Office are obligated to keep abreast of the city’s developments, including elections and functioning of the Legco.

But a clear and fine line ought to be drawn between keeping a close watch and putting their hands on matters that are primarily the city’s internal affairs within the letter and spirit of the promise of high degree of autonomy.

Any soft lobbying by Liaison Office officials to dissuade certain candidates from contesting Legco seats cannot possibly fall in line with the pledge of autonomy. It is highly dangerous for Beijing to try to influence the results of elections.

By the same token, it cannot be wrong for the Liaison Office to get a hand on the contest for the post of the Legco President. But if they reach their hands too far to the extent of picking the next President, it will deal a body blow to the city’s high degree of autonomy.

Beijing’s pledge of non-interference with the city’s domestic affairs in the Basic Law must not only be done, but, also importantly, be seen to be done. The recent high-profile deeds and words of mainland officials on the election and new Legco President will deepen people’s anxiety about the erosion of the promises under the “one country, two systems” policy.

If it is left unattended and that mainland officials fail to adopt more self-restraint, the increasingly invisible hands of Beijing will add more fuel to the feeling of separation and pro-independence sentiments in the society. And Hong Kong people will only have them to blame if some of them fail to speak up when they found Beijing’s hands have reached too far and too deep.