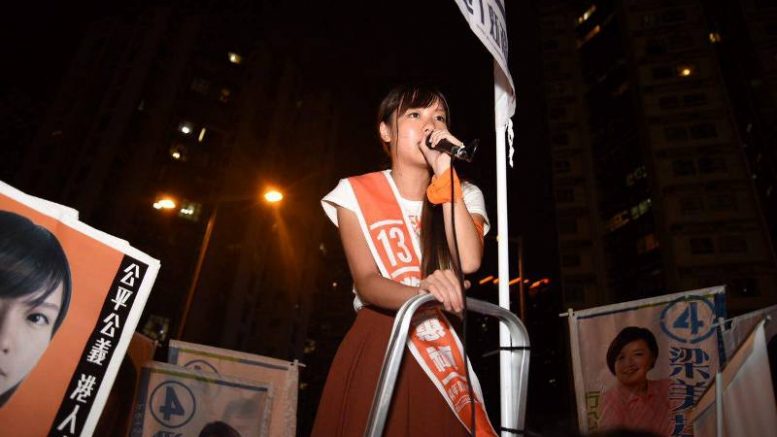 Yau Wai-ching of the Youngspiration is one of the six localists elected to the new legislature. There are fears that they may create more difficulty for the government in the legislature.

In a quick damage-control act, Financial Secretary John Tsang Chun-wah yesterday called on a top international credit rating agency to know more about Hong Kong before drawing a conclusion on the city’s weakening capability to govern in view of the growing strength of anti-establishment force in the legislature.

Tsang’s call was made in response to a report issued by Moody’s on Monday on the post-Legco election political scene in Hong Kong. It said: “With these (election) results, filibustering… is likely to continue, a credit-negative development that will result in slow and less effective policymaking.”

Tsang told reporters rating agencies should know Hong Kong in depth and how the government operated before coming to a conclusion… They should be fair to us.”

Defying calls by Chief Executive Leung Chun-ying for voters to kick out filibustering and radical pan-democratic lawmakers with their ballots, more than 55 per cent of a record 2.2 million people who cast their votes on September 4 voted for the pan-democratic candidates, localists and radicals. Two incumbent lawmakers who were usual players of filibustering, “Long Hair” Leung Kwok-hung and Chan Chi-chuen, were re-elected.

Of the legislators-elect, six are seen as localists, who advocate self-determination. Some have vowed to continue the filibustering tactic and warned of even more radical approaches. The approach of the new faces in handling their relationship with the other pan-democrats, in particular the major factions such as the Democratic Party and the Civic Party, is unclear.

Moody’s said: “Although the opposition is more fragmented after this election, the anti-establishment parties are likely to be unified in voicing their disagreement to the government’s approach to Hong Kong’s relationship with China under the one country, two systems policy.”

International agencies such as Moody’s can be pardoned for taking a dim view of the newly-elected legislature. The reason is simple. Leung and his team themselves have been giving a bleak outlook of their relations with the pan-democratic camp and the legislature as a whole.

Taken into account their hardened, at times, uncompromising approach in dealing with the pan-democrat legislators, the gloomy prediction of the political scene has now become a self-fulfilling prophecy.

The approach of the Leung team in putting the blame on filibustering legislators for their governance conundrum has ironically reinforced the doubts and concerns of credit rating agencies about the city’s outlook.

Their concerns will no doubt grow deeper if they found the Government only talks in length about the problem, but runs short of ideas and political will to find ways to fix the problem or minimise the damage, to say the least.

Beset by structural deficiencies in the political system and executive-legislature relationship, the government is faced with increasingly immense difficulty in seeking support from the legislature for their policies.

The unpopularity of Leung has aggravated the governance trouble.

A weak government runs into more difficulty in reconciling different interests that are involved in complex issues such as housing development. A case in case is the controversy over claims by legislator-elect Eddie Chu Hoi-dick of collusion between government, business, rural and triad forces in a public housing development plan in Yuen Long.

The setback in Leung’s public housing plan has nothing to do with filibustering by lawmakers, but the weak capacity of government in fighting hard battles on land and housing front.

Laying blame on filibustering lawmakers for the government’s governance difficulty risks diverting attention on the root causes of the problems.

Commenting on Moody’s report, Leung did not comment on whether the finding was reasonable. Instead, he said the report showed international credit agencies were concerned about the negative impact of filibustering.

Rating agencies will feel more assured if the Government tackles their governance problem at its roots and finds practical solutions, not playing the blame game.