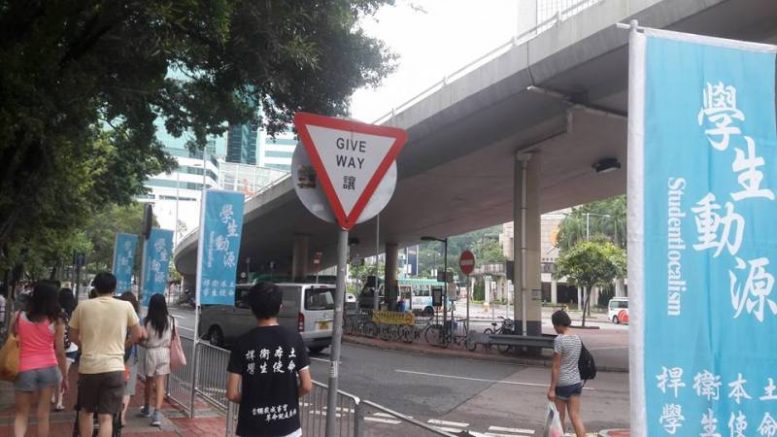 A new student group, Studentlocalism, plans to promote setting up of localism concern groups in secondary schools to discuss issues including independence.

From universities to secondary schools, the idea of Hong Kong independence is drawing a bigger group of followers. A survey conducted by the Undergrad, a University of Hong Kong Student Union publication, found more than 60 per cent of students will say yes if they are asked in a referendum tomorrow on whether Hong Kong should become an independent state.

34 per cent believe Hong Kong will ultimately become independent. 31 per cent support armed revolution for the pursuit of independence.

The issue of Hong Kong independence looks certain to be a hot potato on the plate of the management and teachers in secondary schools when the new school year begins next month. Calling themselves Studentlocalism, a new group plans to promote the setting up of “localism concern groups” in secondary schools. On the agenda of the new group is the question of Hong Kong independence.

At least a handful of such groups have been set up, according to recent media reports. One group said they want students to understand more about some of their basic ideas. They include localism, Hong Kong independence, the defence of traditional Chinese character, opposition against teaching Chinese Language course in putonghua and the future of Hong Kong.

A former member of the Education Commission, Tai Hay-lap said any discussion about independence in schools should be based on history and the parameters of the Basic Law.

“If the idea is to promote the separation and independence of Hong Kong from China, it is no different from splitting the country. It is a question of right and wrong, not just ordinary academic discussion,” he said.

Also speaking at a RTHK programme, Cheung Yui-fai, a vice-chairman of the Professional Teachers’ Union, said students should be encouraged to discuss the affairs of their society and country. He questioned the need of prohibiting students from talking about certain topics.

Sky is supposed to be the limit in the pursuit of knowledge in schools and universities. Hong Kong people take pride in the room and culture of free expression with no boundary.

A red line over the issue of Hong Kong independence looks set to be drawn in discussion in schools, media and the public domain.

It will no doubt cause more divisiveness and controversies in the society. The row over the red line being drawn by the Electoral Affairs Commission over Hong Kong independence in the form of a confirmation note for political aspirants seeking to contest the Legislative Council is an example.

Speaking to the media, Lau Siu-kai, former head of the government’s Central Policy Unit, said the confirmation note was a move by the authorities to set a “red line” for Legco election candidates to keep clear of.

Six persons, including Edward Leung Tin-kei of the Hong Kong Indigenous have been disqualified because their words and deeds were deemed as having crossed the red line.

There is a red line of another kind being drawn over the publicity materials of Legco candidates. Some candidates’ publicity pamphlets that carried wordings such as “Hong Kong independence” had to delete some sensitive wordings and replaced them with symbols such as moon and sun for an approval by the Government’s Post Office for delivery.

Lian in trouble over column on independence

Meanwhile, a “no-independence” red line seems to have emerged in the opinion pages of the Chinese-language Hong Kong Economic Journal. According to Joseph Lian Yizheng, a former chief editor and leading columnist, his column published end of July about “jurisprudential Hong Kong independence” might have provoked the mainland authorities. That has become his last column on the newspaper.

There are fears that the issue of Hong Kong independence might become a near-taboo subject in the traditional electronic and printed media.

From election to students’ activities in schools and newspapers’ oped pages, a “no-independence” red line that sets down the upper limit of freedom of expression has emerged.

In his 2014 policy address, Chief Executive Leung Chun-ying has singled out a series of articles in HKU’s Undergrad for attack, warning of the growth of pro-independence thinking.

It served the opposite. The high-profile tirades have spurred the development of separatist thinking.

Now that the genie of independence is out, it will be counterproductive to try to eliminate it or to keep it away from the people. Doing so will stir the feeling of defiance of people, in particular youngsters, giving a boost to the advocacy of independence.

Be the first to comment on "‘Red line’ over Hong Kong"