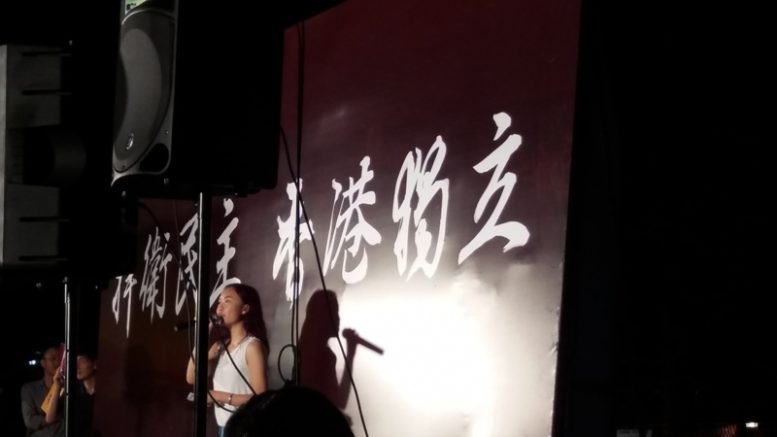 For the first time in history, Hong Kong independence has become the theme of a mass rally held at the Tamar Park near the Government headquarter complex on Friday.

In a sense, Hong Kong made history on Friday when, for the first time in recent memory, calls for Hong Kong independence erupted at a mass rally attended by thousands of people at the Tamar Park, just a stone’s throw from the government headquarters.

True, many might have turned up primarily because of their anger with the decision by a senior civil servant, who acted in her capacity as a returning officer of the Legislative Council election, to disqualify localist Edward Leung Tin-kei from running in New Territories East geographical constituency. (Five other lesser-known aspirants were disqualified.)

The officer, Cora Ho Lai-sheung, has ruled the deeds and words of Leung of the Hong Kong Indigenous have contradicted with his declaration to uphold the Basic Law and three provisions in the mini-constitution, including Article One that says Hong Kong is an inalienable part of China.

Ho’s decision has been criticised by all members of the legal sub-sector in the Election Committee, which elected the 2012 chief executive. One member has lambasted her for having played the role of judges in ruling against Leung’s candidacy that she was not empowered to do so.

Yesterday, Chief Executive Leung Chun-ying defended Ho’s decision. He said he had not contacted the returning officer, insisting she made the decision on her own. There was no political interference, he said.

Few people believe that was probably only half-truth, or truth in its technical sense. Many are adamant it was plain lies.

In view of the apparent double standard in the ruling of applicants with some who have made similar pro-independence comments but were given the entry tickets, it is widely believed the decision to bar Leung and five others from contesting the election was aimed to stop the growth of pro-independence thinking.

In a frank admission, Lau Siu-kai, a vice-chairman of the National Association of Studies on Hong Kong and Macau, a quasi-official think-tank, said both the central and SAR governments are the “shield” behind the returning officer.

Legislative Council President Tsang Yok-sing said yesterday the campaign for Hong Kong independence has no future. Most people would agree with him, at least for a certain period of time.

But whether those who advocate independence should be banned from running for Legco election is a different matter. A readers’ survey carried in the South China Morning Post found 65 per cent of respondents say those candidates should not be excluded from the race.

The controversial move by returning officers with the two governments behind ostensibly to screen out candidates has deepened fears about the erosion of Hong Kong’s systems and values, in particular rule of law and procedural justice. Worse, it poured oil to the fury permeated in some quarters of the society about the high-handedness of the Beijing authorities in neutering people’s democratic rights.

First, it was the notable August 31 decision made by the National People’s Congress Standing Committee in 2014 to impose a set of restrictions over the 2017 chief executive election through universal suffrage, including an alleged screening for candidates.

Then came Cora Ho’s decision to disqualify Edward Leung, who grabbed more than 60,000 votes in a Legco by-election in February and was widely tipped to have a good chance of winning on September 4.

The turnout at Tamar Park on Friday night, which was ranged between 2,500 (police’s figure) to over 10,000 (organisers’) is still small compared with the 7.3 million population. Of them, those who are die-hard supporters of independence will be smaller.

But the feeling of fears about the loss of the city’s rights and freedoms, values and procedures and anger towards the mainland authorities is no doubt shared by a bigger crowd.

It is arguably largely because of practical concerns (food and water supply, defence needs) and political risk (a PLA crackdown) that support for independence has stayed at a level below 20 per cent of people.

In view of those factors, the idea of independence had not been taken seriously in the past decades. It had become a kind of political taboo.

That is no longer the case, in particular after the first pro-independence rally on Friday.

Make no mistake. There are no signs of a rapid surge of the number of followers and activists of independence movement. At least in the short-term, the pro-independence activists are likely to face more political pressure, or even prosecution for some alleged wrongdoings in rallies.

But such cases as disqualifying pro-independence candidates will fuel the sentiments of separation, in particular among young people, from the mainland, giving vigour to pro-independence activism and causing perennial tension in mainland-Hong Kong relations.