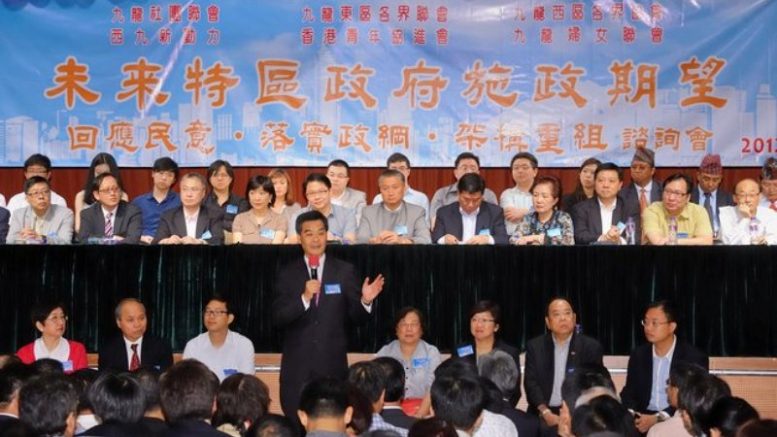 Chief Executive Leung Chun-ying attends forum hosted by pro-Beijing groups in May 2012 as part of his campaign to lobby for support from the 1,200-member Election Committee.

The ongoing Legislative Council election is billed as the curtain raiser of the next chief executive election in March. If the pro-establishment force is able to get a two-third of seats in Legco, the legislature and the executive branch will be integrated. This will reduce the resistance of the legislature against the government, thus being conducive to governance. It may even fundamentally solve the problem of filibustering.

Will the results of the pro-establishment force in the Legco election be critical to the re-election of Chief Executive Leung Chun-ying?

The argument of Legco election having an impact on the CE race is that Beijing will pick the next CE after studying results of the Legco polls. But what’s the relationship between the two? Weird theories abound. Some said Beijing will back Leung for another term if the loyalist did well because the governance of Leung will then become smoother. The opposite line of argument is that Beijing will definitely keep supporting Leung if the pro-establishment force performed poorly. The idea is to have a “hard-line” CE to deal with a legislature dominated by pan-democrats.

Forget about which theory is correct or incorrect. That there are two totally different conclusions indeed show it is difficult to tell the impact of Legco elections on the jockeying for CE, if any. Results of the September 4 election has little to do with Beijing’s choice of the next CE. Any change of the number of seats taken by pan-democrats will not change the ecology of the legislature, nor the executive-legislature relationship. In other words, the impact of results of the Legco polls on the CE election is very limited. The major election battlefield is the election of the 1,200-member Election Committee, which will choose the next CE.

Comprised of 1,200 members, the EC is composed of four sectors, namely business, professionals, labour and grass-roots and politics. Beijing almost has full control over the business and political sectors. In the third sector, only the social welfare and culture sub-sectors may cause a bit of trouble to Beijing. The professional sector will be the most difficult part for Beijing. But taken together and based on previous EC elections, the best pan-democrats could do is to get about 200 to 300 seats. True, they will not be able to change the election results, but can tip the balance.

Unless there is a change of strategy, the pan-democrats, according to Democratic Party chairwoman Emily Lau Wai-hing, will not field their own candidate. Instead, they will pool together their votes for a candidate they support. Based on the assumption that pan-democrats will hold 200 votes, they will be able to become the king-maker if there are two candidates contesting with each holding 500 votes. Under such scenario, candidate who wants to win the top post will have to “negotiate” with the pan-democrats to seek their support. The influence of Beijing will therefore be greatly weakened.

To avoid the scenario of pan-democrats holding a critical minority vote, Beijing will pull out all stops to install their “own men” to sit on the EC in order to keep a firm grip on the electoral body. The good show will have to wait until December 11.