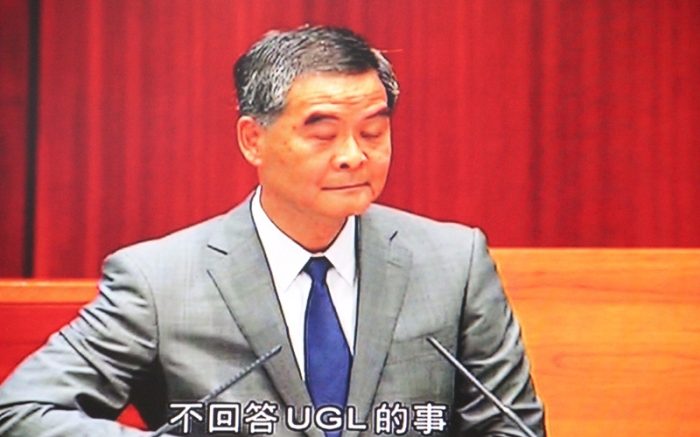 Chief Executive Leung Chun-ying faces grilling over his alleged role in the ICAC shake-up and the UGL case at the Legislative Council question time on Thursday.

“President, I’d stop here, leave the last minute to our Chief Executive. He can say whatever he wants,” said non-affiliated legislator Paul Tse Wai-chun at Leung Chun-ying question time on Wednesday, the last in the current Legislative Council session.

Imbued with mixed feelings of dismay and frustrations, helplessness and futility, Tse’s remarks could not be a better concluding note of the current Legco term, which coincides with the first four years of Leung’s tumultuous reign.

His outburst was part of another round of exchanges of sharp words between Leung and some lawmakers, mostly from the pan-democrat camp but also a few from the other government’s bloc, at the legislature.

Tse, who is seen as a member of the pro-establishment force, joined ranks with several pan-democrats to grill Leung over his role in the termination of the acting capacity of a top ICAC investigator Rebecca Li Bo-lan as head of operations department. Li resigned after being told by the ICAC Commissioner Simon Pei Yun-lu of the decision.

Speculation was rife that Li’s fall from power was related to her handling of an ICAC probe into the allegation against Leung over his acceptance of a payment of HK$50 million from Australian firm UGL before he took the post of the chief executive.

Suspicion grew as Leung has not directly respond to claims that a request by ICAC investigators for information from his office and the Executive secretariat has been left unanswered for more than one year.

Legitimate they are, the spate of questions raised by lawmakers over the ICAC shake-up-cum-UGL saga was stone-walled by Leung. He cited rules that prohibit any parties in a case including those being complained from discussing the case.

In his response to Labour Party legislator Fernando Cheung Chiu-hung, he ridiculed Cheung for mistakenly referring UGL to UGC as evidence that he did not know the case well. 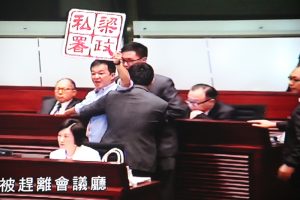 Responding to another question from Civic Party’s Alvin Yeung Ngok-kiu, Leung insisted the documents relating to his case had already been disclosed in October, 2014. Hours later, his office explained he was referring to the documents published by an Australian newspaper when they broke the story.

Leung’s play of tactics of denial and word play and combative style contrast oddly with a clear attempt by NPC chairman Zhang Dejiang to try to moderate the political atmosphere during his visit here in April.

At an increasingly intriguing time with the 2017 chief executive election drawing near, Leung showed no sign of softening of his hard-line stance and self-reflection of the deficiencies of his leadership.

It is unclear whether he has a sense of self-reflection about his shortcomings. Equally unsure is whether he has been told by Beijing leaders to do some soul-searching and fault-finding.

One possible theory is that, as his close aides might have advised him, he stands to gain an advantage in his contest for the top post if he sticks to his style and tactic.

Such theory was floated by Executive Council member Cheung Chi-kong, one of Leung’s closest aides. Cheung wrote in an article published in the Chinese-language Ming Pao this week, Leung would “100%” get re-elected if pan-democrats get close to or half of the seats in the September 4 Legco election.

The argument is that Beijing needs a tough guy to counter the pan-democrats if the opposition pan-democrats gain more seats in the next Legco.

There is a totally different argument. If the pro-establishment camp does well, Leung can claim credit and therefore stands to gain from the loyalists’ victory.

When asked about the implications of the success or failure of the loyalists on his re-election bid at yesterday’s session, Leung said both theories have a point.

Which theory makes sense is in the eyes of beholder.

But the key questions relating to Leung’s re-election bid are clear.

Question Number One: Whether Hong Kong will be better after July 1 next year if Leung is re-elected and runs the city as he did in the past four years.

If the answer is no, question number two is whether Leung will change his style and tactic for a better Hong Kong if he is given five more years. And question number three is even if, a big if, Leung is prepared to change, will Hong Kong people trust him and give him another chance?

Beijing’s answers are anybody’s guess. But to a lot of people, they already have theirs.