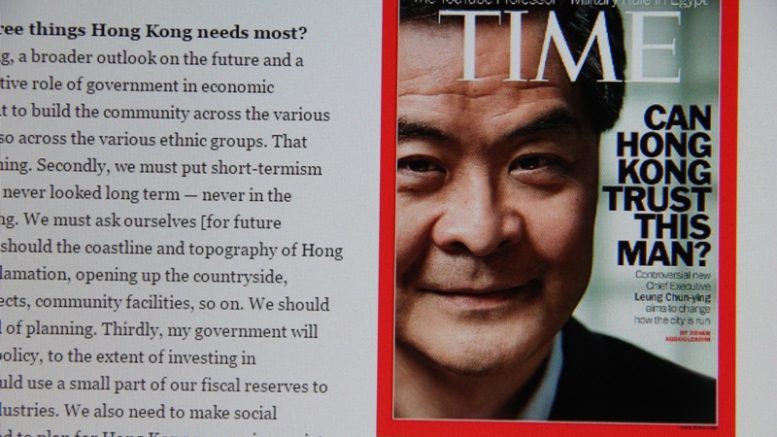 TIME magazine puts this question on their cover on June 30, 2012: Can Hong Kong trust this man? Four years on, most HKers have an answer.

It can only be fair for Chief Secretary Carrie Lam Cheng Yuet-ngor and Executive Council Convenor Lam Woon-kwong to appeal legislators not to oppose the government and its proposals just because they did not like the chief executive, namely Leung Chun-ying.

But as the pair made the appeal on Saturday, claims by the Democratic Party about Leung having interfered with a senior appointment of ICAC and delayed in assisting a probe into his alleged wrongdoing in the UGL case have shed some light on why the Leung factor did matter in the governance conundrum.

Making a final plea for lawmakers’ green light to a bill seeking to reform the Medical Council, Mrs Lam rejected accusations that the chief executive would manipulate the medical body through the four new appointed members, saying it was “totally unsubstantiated.”

Carrie Lam pleads to aim at policies, not Leung

Asked by reporters on whether the bone of the contention laid with her boss, she described it as “aimless shooting.” “If we take a perspective of aiming at person/s, not the matter/s itself, Hong Kong people will end up the loser ultimately.”

Also speaking on Saturday on a separate occasion, Lam lambasted legislators and society at large for rubbishing government policies because they did not like the person, referring to Leung. “If you originally agree to the policy but disagree to it because someone is the chief executive, this is irresponsible… an act of ‘primary school chick (kid).”

That the two key members in the Leung team sought to persuade the public to focus on the issue/s at stake in defending the medical bill and government policies as a whole is in itself a self-admission of the Leung factor in the city’s governance. The Leung factor does matter. Like it or not. Fair or not. 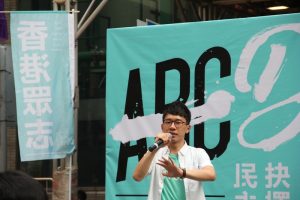 Demosisto, a students’ political group, champions ABC, which stands for “anyone but CY”, campaign at the July 1 rally.

It is not difficult to understand. More than half of the populace have no faith in Leung if results of opinion polls on his popularity and trust are not off the mark.

Public support and trust towards him has slipped to a low point since he came to power in 2012. This is not so much because people found all his policies are bad. Some are, but not all.

Four years after he took power, most Hongkongers gave a flat no to the question raised on the cover story of the US TIME magazine on June 30, 2012. With a big picture on the cover, the headline read: Can Hong Kong Trust This Man?

Apart from controversial issues and incidents including the political reform fiasco and Occupy Central protest, Leung has failed to come clean in a list of claims and accusations against him. Some of his close allies have also failed in the same terrain. They include former Exco member Barry Cheung Chun-yuen and development minister Paul Chan Mo-po.

Doubts about Leung’s integrity were raised when Henry Tang Ying-yen, his main rival in the 2012 chief executive election, accused him of having said at an Exco member Hong Kong would have to deploy anti-riot police and use teargas against protestors ultimately. Before he took office, media reports about the illegal structures of his house at The Peak and, more importantly, the way he handled it have deepened the doubts about his integrity and trustworthiness.

The past four years have seen incessant negative publicity about him and his family. Claims of his abuse of power and influence in the so-called “luggage-gate” controversy have emerged as one of the most damaging cases of his failure on the personal front.

The most damaging case seems to be the UGL controversy. Leung is facing a probe by the ICAC over a HK$50 million payment by Australian firm UGL to him in 2012. The Democratic Party told a press conference on Saturday, citing “reliable sources” as saying, efforts by ICAC investigators to seek information of Leung’s office and the Exco office about his declaration of interest on the payment, if any, has been left unanswered for more than one year.

Worse, Rebecca Li Bo-lan, the ICAC’s Number Two person who headed its operation arm and led the UGL case, tendered her resignation after she was demoted.

Leung’s office denied any involvement in issues on senior ICAC positions, but refused to respond to claims about their delay in assisting ICAC investigation.

The shock shake-up fuelled rumours that she was demoted because she was too persistent in pursuing the alleged wrongdoings of Leung, just as she did on other cases.

Whether the whole truth will come to light is anybody’s guess.

It seems certain doubts about Leung’s integrity will grow deeper and public trust in him wear thinner if he fails to come clean on the UGL case. And more damagingly, the independence of ICAC, a bedrock of Hong Kong as a clean, rule-based society, will be mired in uncertainty.