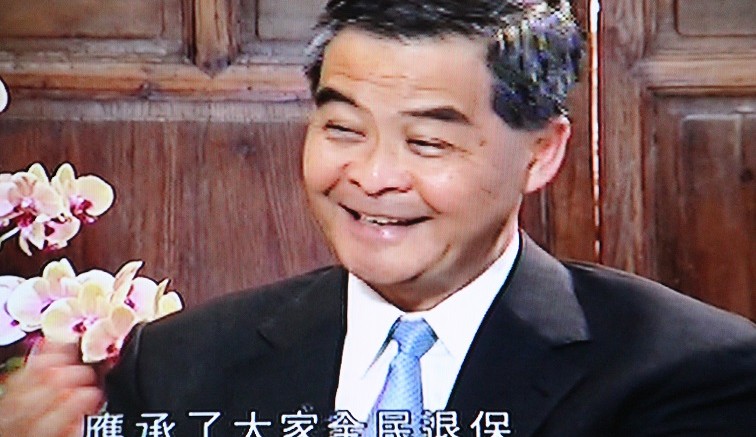 Chief Executive Leung Chun-ying tries to set the record of what he has said and has not said in the issue of retirement protection in a TVB interview.

Pundits say a “chief executive battle in the dark” (特首暗戰) has begun. Even if, a big if, the warfare under daylight has not started, it won’t take long for aspirants for the top post to enter into close counters and direct rivalry under the sun.

The weekend saw Chief Executive Leung Chun-ying, who has said he would like to seek another term even before he took the oath for his first term in 2012, gearing up his re-election campaign in a blitz of publicity.

On Saturday, he spoke on the “Belt and Road” strategy, one of his pet subjects, at RTHK’s Letter to Hong Kong. Also on Saturday, TVB ran the first of a three-part interview with Leung.

The TVB interview is the third he gave to media outlets this month. He rarely gave one-on-one interview to the media before then.

In Saturday’s interview, he rebuked criticism against his governance style and record.

First, go to the mass. Pledging to keep talking to his fellow residents with a folding chair, a notebook and a pen after taking power, Leung was accused of failing to do that. He said he could do as he has promised on condition that no one “threw objects and blocked the street”, which he said has prompted police to have heavy presence.

Second, listen to dissenting views. He denied selectively hearing what he likes to hear, but turning a deaf ear to opposition voices. Leung said he has repeatedly invited pan-democrats to dine and chat, but pan-democrats boycotted having dialogue with him.

In Sunday’s interview, he also defended his record in livelihood improvement.

He did not respond directly to calls for him not being re-elected, or the so-called ABC campaign, meaning “anyone but CY.” But he added: “The present problems facing Hong Kong will not be solved by a change of the chief executive.”

The intensified publicity drive of Leung came about the time the National People’s Congress chairman Zhang Dejiang paid an “inspection” visit to the city, during which he has met with four pan-democratic opposition lawmakers. They told Zhang on his face Leung must go.

It also coincided with growing calls for Beijing to drop him from the next CE race and increased publicity offensives of his two top aides, namely Chief Secretary Carrie Lam Cheng Yuet-ngor and Financial Secretary John Tsang Chun-wah.

Tsang has continued his charm offensive through his posting on Facebook, focusing on major themes including localism, young people and “Belt and Road” strategy.

Although she has repeatedly talked down the possibility of her vying for the top post, Mrs Lam has increasingly been seen as a likely candidate due to her switch to a more proactive approach in seeking media limelight recently.

At a dinner with a group of pro-establishment lawmakers last week, Mrs Lam has identified three major livelihood issues that have been left unresolved. They include complaints against facilities in public housing estates run by the Link Reit and expensive MTR fare and the leveraging of employees’ contribution under the Mandatory Provident Fund.

The string of publicity offensives of the city’s top three officials recently has fuelled speculation that the race for the next chief executive scheduled for late March has kicked off with a “battle in the dark.”

Five years ago, Leung was seen as a non-starter in the 2012 chief executive race as Beijing had chosen former financial secretary Henry Tang Ying-yen. Leung had succeeded in seeking public support as manifested in opinion poll, also thanks to Tang’s own goal, in particular the “underground palace” saga.

With his unpopularity hanging at a high level, Leung seems to have already felt the pressure for him to boost his popularity and, among others, salvage ties with the pan-democratic opposition. That is seen as vitally important if he is still keen to run; few doubt about that.

Leung’s new round of game with pan-democrats

In the TVB interview, he claimed to have proposed the meeting between Zhang and the four pan-democrat lawmakers. In his second arrow, he said on Sunday he was hoping to arrange a visit by all legislators to inspect the East River water supply system in Guangdong. Some pan-democrats have said, however, they would boycott the trip if it is led by Leung.

With the next Legislative Council election just about three months to go, Leung knows well the pan-democrats will play the “down-with-Leung” card. He is eagerly keen to impress people he has walked extra miles to mend ties with the pan-democrats. His message: if it doesn’t work, blame the pan-democrats, not my fault.

Unless Leung changes his defensive and denial mode, the chance of him winning the hearts and minds of people is slim, doubling the difficulty for Beijing when deciding who should be the next chief executive.