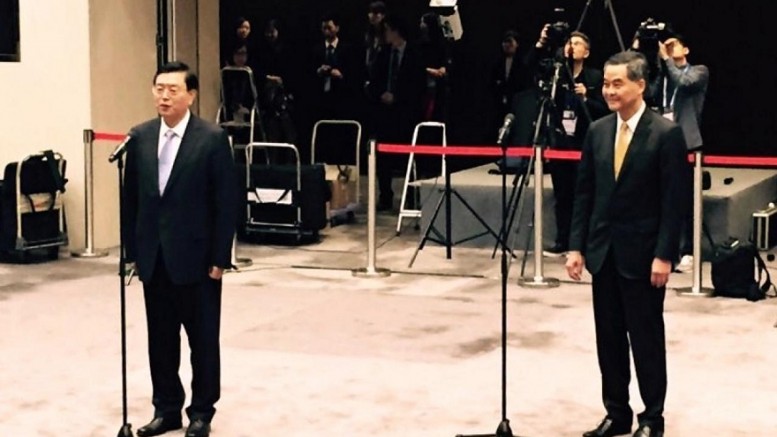 Chief Executive Leung Chun-ying has received some nice words from visiting NPC chairman Zhang Dejiang during his three-day visit in Hong Kong. But the guarded praises help little to pop up the popularity of Leung.

Superficially, Chief Executive Leung Chun-ying stood to gain from the visit of a state leader to the place he governed except for the unlikely scenario that he was given a reprimand during the visit. With such nice words as “full endorsement” and “satisfaction” of the Xi Jinping-led central authorities over his leadership and work, Leung’s leadership and governance should have been shored up by the “inspection” visit of National People’s Congress chairman Zhang Dejiang ended on Thursday.

This is not the case.

It can even be argued that ask 10 ordinary citizens on the streets now half or more than half of them may say they don’t think Leung will get his second term.

This is partly because the sweet talk by Zhang about Leung’s governance has been so routine and carefully-crafted to almost mean nothing or, worse, imply something negative.

At a time when the jockeying for the post of the next chief executive election has become sensitive, it is not surprising Beijing prefers caution, not to comment on the chance of Leung or any other potential candidates in next year’s race.

Perhaps more importantly, Beijing understands well the depth and width of the opposition and resistance against giving Leung five more years to lead the SAR.

One critical development is the growing voices of opposition and reservation about his re-election bid from within the pro-Beijing, pro-establishment during and after the “two sessions,” namely the NPC and Chinese People’s Political Consultative Conference, in Beijing in March.

Key pro-Beijing figures Tsang Yok-sing have dropped strong hints that Leung might become political liability for the pro-establishment candidates in the September 4 Legislative Council election. In a surprise decision, Starry Lee Wai-king, who heads the pro-establishment flagship Democratic Alliance for the Betterment and Progress of Hong Kong, resigned from the Executive Council, Leung’s top advisory body, in March.

Lee’s move has been widely interpreted as an attempt to distance herself and the party from Leung to try to keep the negative impact of the Leung factor in their election.

If the DAB move has been subtle, the ABC campaign, or “anyone but C.Y.”, is more direct and damaging. The political slogan coined by Liberal Party leader James Tien Pei-chun has become as widely and easily understood as ABC in the city’s political talk. Choi Yuk-lin, a vice-chairman of the leftwing Federation of Education Workers who is considering to run for the next Legco education functional constituency, told reporters Hong Kong deserved a “better chief executive.”

It looks certain candidates vying for the Legco seats will have to declare whether or not they support the re-election bid of Leung. All signs are that most major pro-establishment political parties would refrain from giving unreserved support for Leung, not to mention the pan-democrats.

Pan-democrats’ die-hard opposition against Leung’s second term bid may be entirely expected. But the fact Leung has failed to forge any dialogue with the pan-democrats could deal a severe blow to his political future.

With hindsight, Leung appears to have already felt the wind of change in Beijing. In February, he made an unusual move to offer to attend the anniversary celebration of the Democratic Party. After being snubbed by the Democrats last year, he has ordered all principal officials and senior echelon of the government to boycott the celebrations.

Following his snub by the Democrats this year, almost no senior government officials joined the Democrats’ celebration.

Leung can’t do the job of talking to democrats

After last week’s Zhang-pan-democrats’ session, media reports said Leung had initiated the idea of a delegation of Legco members led by him to visit Shenzhen in July. Democratic Party chairwoman Emily Lau Wai-hing said they would boycott the visit if the delegation was led by Leung.

The Democrats’ refusal to do business with Leung will put him in an embarrassing situation following Zhang’s call for him and his team to foster communication with people holding different political views.

Zhang did not have to wait to see whether Leung could do the job of communicating with the pan-democratic opposition after he personally waded in to break the ice.

There is no doubt a big gulf between Beijing and local people when it comes to the chance of success of Leung’s re-election bid.

Beijing may think Leung has done a good job in steering the city’s economic development in the direction of the nation’s economic strategy and acting to resolve longstanding livelihood problems.

But it is clear he has failed critically on the political front, which is arguably the most important job for the chief executive, in fostering harmony, thus worsening the city’s divide and frictions with the mainland.

Seen from that that perspective, he is the loser in Zhang’s inspection tour.