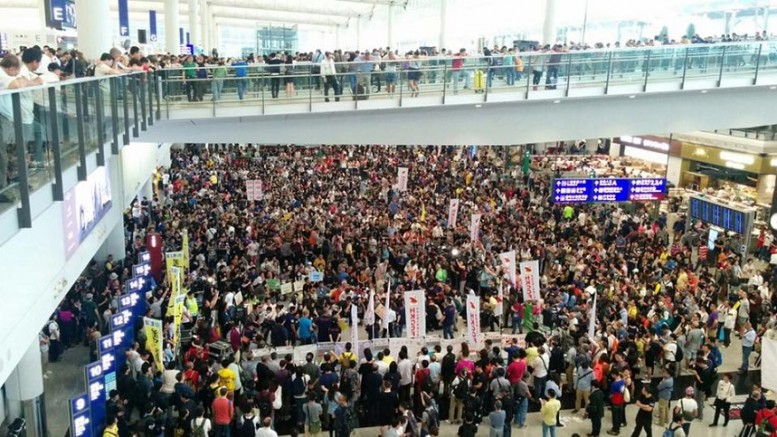 More than 2,500 cabin crew and supporters greet visitors at the Hong Kong International Airport with a sit-in to vent out their anger over the 'luggage-gate' row surrounding Chief Executive Leung Chun-ying and his daughter. They fear flight airport is compromised in Leung's alleged abuse of power.

It may sound exaggerating to describe as “luggage-gate” the row over a piece of left luggage belonging to the younger daughter of Chief Executive Leung Chun-ying at the airport. Compared with the Watergate scandal and the so-called “Lexus-gate” controversy that led to the downfall of former U.S. President Richard Nixon in 1974 and former financial secretary Antony Leung Kam-chung in 2003 respectively, the “luggage-gate” is in some aspects less harmful to C.Y. Leung.

But almost three weeks after the left luggage caused a stir, it has refused to go away, causing harm to Leung’s image and popularity and raising the city’s political temperature as it enters a sensitive election season.

On Sunday, an arrival hall of Hong Kong’s award-winning airport at Chek Lap Kok saw a rare massive sit-in staged by more than 2,500 cabin crew members and ordinary people. They voiced out their anger at the Civil Aviation Department for its alleged special treatment of Leung Chung-yan. Chung-yan left her luggage outside the restricted area. It was later returned to her by Cathay Pacific staff.

Under normal procedure, she should have been required to pick up her luggage on her own and to go through the security check again. Crew members’ union claimed the special arrangement could have compromised flight safety.

The CAD has insisted the matter has been handled in accordance with the relevant rules and procedures, but refused to explain further, or more specifically, the justifications for a departure from the normal practice to deliver the left luggage to Chung-yan by staff.

Leung, who has confirmed talking to an airport staff over the phone before the luggage was handed back to her daughter, has denied any abuse of power and attempt to seek special privilege. But he, his wife and their daughter have not indicated whether they had asked for – and insisted – the luggage to be delivered by others through the restricted zone to the board gate, where Chung-yan was waiting for departure.

The family’s failure to give a detailed account of what happened has put themselves in a disadvantageous position. With doubts already lingering, fresh claims and counter-claims have effectively added oil to the fire.

Speaking at the sit-in on Sunday, a former National People’s Congress Hong Kong deputy David Chu Yu-lin has claimed that the airline staff cried when dealing with Leung. “I am very upset because … none of them dared to speak up,” he said.

Although his claim should be given a grain of salt, it has reinforced the general perception among a sizeable segment of the society that Leung has not told the whole truth and that there were something dubious in the case.

Like it or not, Leung not given the benefit of doubt

Like it or not, Leung has not been given the benefit of doubt. Most people have already formed their opinion on the case, which tends to be unfavourable to Leung. Any doubts left unanswered will add insult to injury to the beleaguered chief executive.

Also at the airport on Sunday was a group of members from the Voice of Loving Hong Kong and ordinary citizens, who staged a protest against the sit-in. Group convenor Ko Tat-bun claimed the situation had been exaggerated, and was an attempt to topple Leung. Ko said: “Has Leung abused his power? It is abuse only if he has repeatedly done so.”

The unconvincing defence of Ko, ridiculed by some as illogical and nonsensical, has proved to be counterproductive, exposing the weaknesses of the Leung’s supporters. Worse, the involvement of “fans of Leung” groups has given more ammunition for Leung-bashers to lengthen the “luggage-gate” saga.

Make no mistake. Leung looks certain to survive from the “luggage-gate”, unlike Richard Nixon and Antony Leung, who stepped down in the wake of their scandals.

It sounds mere wishful thinking, however, to expect C.Y. Leung will be left unharmed from the “luggage-gate” as damage to his credibility and image has been done, and will not be repaired any time soon.