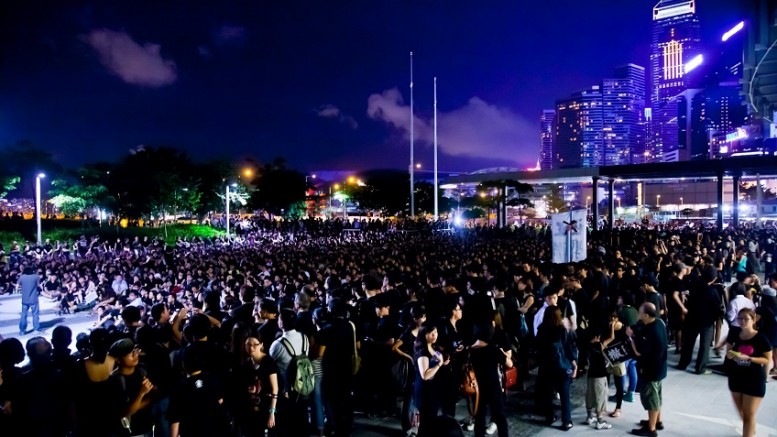 More than 120,000 people join a rally against the introduction of national education curriculum in schools at the Tamar government headquarters in 2012.

Following its interpretation of the Basic Law, the National People’s Congress Standing Committee has imposed restrictions over universal suffrage in Hong Kong in its decision decreed on August 31, 2014. It dashed hopes for popular vote for the city’s chief executive.

Beijing’s promise for the political space for Hong Kong has turned sour following the suggestion of the notion of “two governing teams” by a former central government Liaison Office official, Cao Erbao (曹二寶) in 2008. The publication of the State Council’s White Paper on the implementation of “one country, two systems” policy in 2014 has shrunk the political room for the city gradually.

Former premier Hu Jintao paid a visit to Hong Kong in 2007 to mark the 10th anniversary of the reunification. During the visit, he has asked the government to introduce national education in disregard of Article 136 in the Basic Law that says education falls under the city’s high degree of autonomy. After Leung took power, he bulldozed national education curriculum. The idea is to change the minds of Hong Kong people through the mainland ideology introduced in national education.

Once such education is introduced, some erroneous ideas will be accepted as a matter of course. They include::

The distortion of patriotism to becoming brainwashing has spurred the feeling of resistance among young people. Since the Communist Party has hijacked “China,” young people who do not want to be hijacked by the communist would rather abandon the “nation” altogether.

The communist authorities are keen to make use of the “Five-Year Plan” to facilitate integration between Hong Kong and the mainland. It serves the opposite, quickening the pace of pro-independence movement.

The opposition movement against the high-speed railway project in 2010 has marked a giant step in the evolution of localism from theory to practice. The nature of the movement is the opposition against Hong Kong “being planned.” It stems from China’s 12th Five-Year Plan promulgated in 2011, in which there is a separate chapter on Hong Kong. Hong Kong has effectively be incorporated into China’s overall development plan. Beijing may have good intention to do so. But after “being planned,” Hong Kong needs to coordinate with the mainland on various aspects. High-speed railway is one example. It is unnecessary but must be built to coordinate with the mainland’s system.

During the opposition movement, the sentiments of localism, which includes pro-independence feeling, have grown. The 13th Five-Year Plan published this year includes a similar high-speed project that connects the mainland and Taipei. It will serve the opposite, further distancing Taiwan from the mainland. The more Beijing wants to bind Hong Kong with the mainland through planning the stronger the resistance of people against “being planned” and “being united.”

Cases are aplenty that the infiltration of the mainland’s ideology has eroded the city’s values and systems. They include threats to press freedom and freedom of expression and the HKU row over the appointment of legal professor Johannes Chan Man-mun. The controversy caused by the mass influx of mainland visitors, which came about because of the rise of China, has given rise to hostile protests by local residents.

Failure of an era

I attended a rally at Tamar Park following the NPC Standing Committee decision on universal suffrage. One of the speakers lamented the decision marked the “failure of an era.” I deeply shared the feeling. A young man told me during the Occupy Central movement it was people like me in our generation who believe naively Beijing would give Hong Kong people democracy, and did not fight for the highest degree of autonomy. He said they now have to take up the responsibility to fight for independence. “It is you people who wrongly believe you can wait for the arrival democracy through dialogue, tolerance and accommodation. Now we must stand up to use force to fight in streets.” I do not fully agree with what he said, but have a bit of feeling of remorse. Now that the hope for reunification through democracy is dashed, the aspiration for nation-building through independence has naturally risen.

Ching Cheong is a veteran journalist and prominent China and Hong Kong expert. He had previously worked with Wen Wei Po, the Commentary magazine and Straits Times. He had been jailed for 1000 days for allegedly spying for Taiwan. He writes on Greater China issues. This is a translated version of his column published in Ming Pao on April 15.

Be the first to comment on "Beijing sets fire, C.Y. adds oil to independence call"