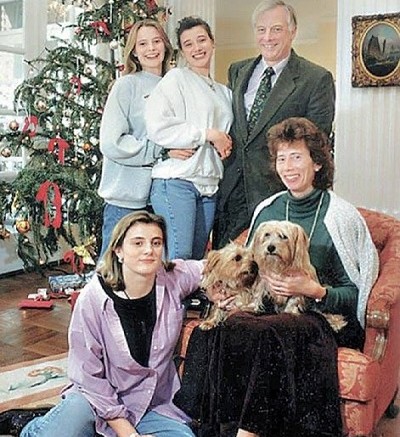 A picture of the family of last governor Chris Patten posted by her daughter Alice (left, front) on her Facebook turns viral on social media. The family has enjoyed good image among the populace, contrasting oddly with the city's present first family hit by accusation of abuse of power.

A row erupted after a piece of left luggage at the Hong Kong airport that belonged to the daughter of Chief Executive Leung Chun-ying was being sent back to her by airport staff from non-restricted area to the boarding gate, where she was waiting. Some say it as a trivial matter; there is no need to make a mountain out of a mole. Some insist it is a case of the Chief Executive abusing his powers and privileges to bypass the airport security rules; it must be pursued.

Leung and his family have repeatedly denied the case has anything to do with abuse of powers. But there is no denying the delivery of her daughter’ luggage by other people to her from outside to the airport’s restricted area is unusual and is a special case. The question is why airline and airport staff were willing to provide the “luggage delivery” service for someone to the restricted area? Is it because they are willing to do so due to the fact they know that the passenger is a member of Hong Kong’s First Family? And even if they have agreed to do so, there is question about whether the top official has taken the initiative to say no to the favour in light of the sensitivity of the matter.

An old story has become a fresh hit on social media at the weekend. About 10 years ago, the then police commissioner Lee Ming-kwan was stopped by a police offer for a breach of traffic regulations while he was driving. He was being identified as the Number One of the police force. But the police officer was abide by the system and asked Lee to present his identity card and driving licence, and had issued a penalty ticket to his boss “as usual”. Lee was very cooperative and received the ticket. The fact netizens have revisited the old story speaks volume of the public concern about the Leung family case.

Stories about frontline staff abide by the rules and system have been commonly adopted by many countries for civic education and publicity for the people. Lee Ming-kwan’s case reminds me of a story in the former Soviet Union, which has been collected in school textbooks in the mainland in the 1950s and 1960s. Entitled Lenin and Guards, it tells the story of a guard at the command headquarter of the October Revolution, who stopped the car with Lenin on board and asked for entry permits. A staff accompanying Vladimir Lenin said he was Lenin. The guard then asked for the entry permit of Lenin. Lenin showed his permit and praised the guard for having done his job.

Reagan’s son abide by the system

When former United States President Ronald Reagan first came to power, the American economy was in bad shape. His son was also jobless and had joined the queue to apply for unemployment relief. A staff at the relief office knew who he was and offered to provide a recommendation letter for him. It was flatly rejected by Reagan’s son. He said his father would not be able to face up to his citizens if he accepted the privilege given to him because of his father. US media has trumpeted the story to show the equality and moral standards of the American society. The purpose and effect of the promotion of the case have been obvious.

A more recent story saw former US ambassador to China Gary Locke queuing up for coffee at Starbucks, which ran viral on the mainland social media. It is a basic rule in our modern society for politicians to show clearly they say no to special privilege. Our top officials seem to have no idea about the essence of the meaning of why it matters.