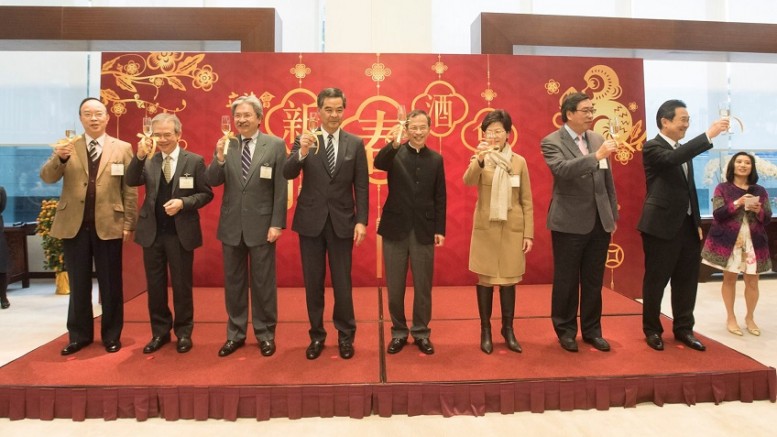 Eyebrows were raised when Legco President Tsang Yok-sing poked fun at Chief Executive Leung Chun-ying in a word play in his newspaper column published on March 24. Writing about the fun and wisdom of Chinese couplets (對聯), Tsang has won thousands of “likes” on social media and apparently offended some others when he put Leung Chun-ying (梁振英) together with national security law (國安法) in the form of a couplet.

Emulating a form of Chinese couplets that match words whose contents and themes are totally unrelated, Tsang wrote Leung’s name could tie well with national security law in Chinese. He explained Leung (梁), in Chinese, is both a surname and a noun that is related to landscape. It is fitting to match it with nation (國), or kwok in Cantonese. Chun (振) is a verb that could mean vibrate and rejuvenate. Its opposite could be peace and security, or on (安) when pronounced in Cantonese. Ying (英) could mean Britain (英國), or ying kwok in Cantonese. The word “law” (法), pronounced as fat in Cantonese, could mean France (法國). So, “ying” matches well with “fat (law)”.

Mindful of the sensitivity of his word play, Tsang made a declaration of “no-hidden-agenda” at the end of his column: “There is no special message. Just for fun.”

In another go on word play in his column carried in free Chinese daily AM730 yesterday, Tsang turned to pun to play satire with Leung again.

He first picked up a pun with Republican presidential hopeful Donald Trump, citing a recent newspaper article that targets at the anti-globalisation view of Trump. The article headlined “Nothing can Trump globalisation” with the word Trump linking Trump the candidate while carrying the meaning of trump as a verb.

To few people’s surprise, C. Y. has emerged – again – as the target of Tsang’s word game. He cited as another example that says “Time flies like an arrow” to illustrate the double meaning of a pun. “Time flies” could mean both the rapid passage of time and the counting of time for flies.

“Let me have another word play of pun to take advantage (of someone.) What would you say if I say the saying “Time lies. See why” has something to do with a new story recently?” he asked.

Whether the words “see why” refer to C Y is anybody’s guess. It is also unclear whether Tsang was, when mentioning the word “lies”, in a sense referring to the accusation made by former chief secretary Henry Tang Ying-yen at a 2012 chief executive election television forum. At the forum, Tang was telling Leung on his face “you are telling lies” after the C. Y. denied having said at the margin of an Executive Council meeting anti-riot police should be mobilised to suppress anti-Article 23 protests as Tang claimed.

It is open secret in the political circle that Tsang is no fan, and perhaps also friend, of Leung. If his previous salvos against Leung have been deliberately obscure and diplomatic, his recent play of words has been intentionally explicit and merciless.

But a time with the jockeying for the post of chief executive heats up, Leung and his fans will hardly find any fun in Tsang’s word game.