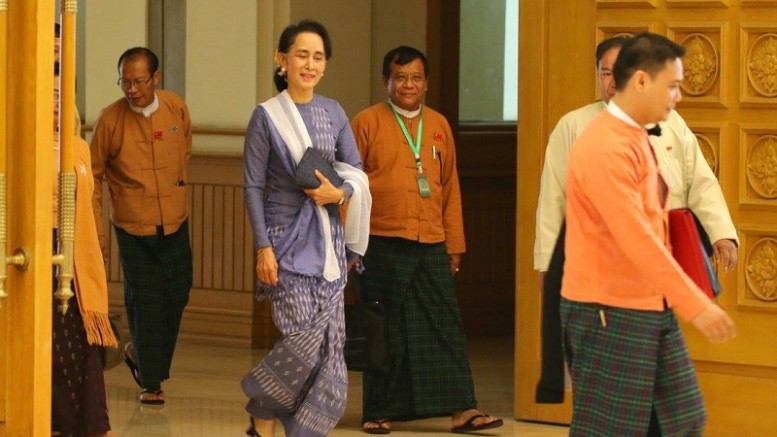 History is in the making in Myanmar on Wednesday as Htin Kyaw, a close friend and confidant of Aung San Suu Kyi, is sworn in to become the first head of state since 1960s without military background. It marks a milestone in the decades-long crusade of Suu Kyi, a Nobel peace prize laureate, for democracy.

Though barred from becoming president by a constitution tailor-made for the military to hold on to power, Suu Kyi has taken four cabinet positions including that of foreign minister. She has vowed to steer the government after the landslide election victory of the National League of Democracy she led in November.

The hard-earned success of the 70-year-old democracy fighter has impressed and inspired aspirants and supporters of democracy and political pundits in different parts of the world.

One of them is Shih Wing-ching, founder of the Centaline Property Agent and a free Chinese-language daily AM730 in Hong Kong. In his regular newspaper published on Wednesday, Shih said Hong Kong people have a lot to learn from Suu Kyi in fighting for social, political reform in the city.

What lesson to learn? Shih said democrats in Hong Kong should take reference to the choice of Suu Kyi in making progress on social change on a piecemeal basis towards its completion. “Otherwise, political struggle will never come to an end; people will never enjoy a peaceful life.”

Shih said there is no denying the existing constitution scripted by the military government is fraught with unfair provisions including a ban for anyone whose spouses have foreign nationality from becoming president.

Since Suu Kyi’s NLP has grabbed more than 80 per cent of votes in the November elections, she should have become the president. But for the constitution to be amended, the process of it will be extremely complicated and there will be conflicts with the army and chaos, Shih has argued.

He wrote Suu Kyi would certainly win support from the people if she decided to raise the issue of amendment of the constitution. But as the military holds a de facto veto against amendment of the constitution, she will have to overthrow the junta government through armed rebellion. The cost to be paid by the people will be huge, he said. “Suu Kyi has not hastily thrown down the gauntlet as the militants in Hong Kong did.

Shih said: “Suu Kyi knows clearly the existing constitution is biased in favour of the military. One quarter of seats of the parliament is set aside for the military. Some cabinet posts can only be filled by up the army… One of the two vice presidents must come from the junta.

“According to the standard of the Hong Kong democrats, such an election is unacceptable. The extent of such election being biased in favour of the military is even greater than that of the functional constituency elections towards the pro-establishment force.

“But Suu Kyi has not boycotted the election and roundly attacked the government by claiming the high moral ground. On the contrary, she seized the opportunity of a relatively more open election for her party to take part so that people can express their wish through their ballots.

“Myanmar is able to take a big step forward in democracy because Suu Kyi is not just full of ideals, but ideas of strategy that meet the reality. Hong Kong democrats should learn from Suu Kyi,” Shih said.

Though without specifying, Shih was clearly referring to the failure of the 2015 political reform, which was aimed to introduce universal suffrage for the 2017 chief executive election. The government blueprint, which was based on a set of rules dictated by Beijing, was rejected by the pan-democrats. They accused the blueprint as “fake universals suffrage” and insisted not to “pocket it first.”

Following the reform fiasco, the issue of universal suffrage has faded away from the city’s political radar screen because the earliest possible time for a popular vote for the SAR top leader will be 2022, which is too remote.

But when the issue of universal suffrage returns to the political agenda, Hong Kong people will be confronted with the same question they and Suu Kyi had faced: take a less ideal package or wait for a better deal.

Let your voices heard: Should Hong Kong learn from Aung San Suu Kyi’s fight for democracy? If yes, how? Write to vohk2015@gmail.com

Be the first to comment on "Is Suu Kyi way the way for HK democracy movement?"