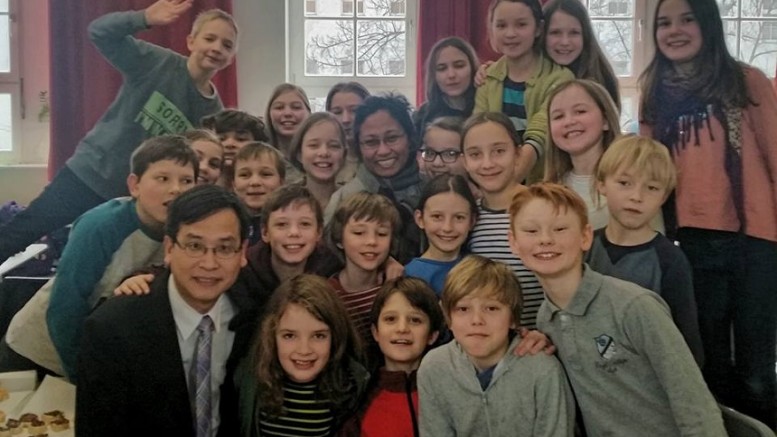 Legislator Ip Kin-yuen and a group of Grade 5 pupils in Germany. Ip proposes a host of measures to ease pressure on teachers and students.

For students committing suicide, there could be a host of various factors inextricably intertwined. Rarely is a suicide case caused by one single factor. Nor should we put the blame on any one factor. The recent spate of student suicide cases have once again aroused discussions in society. Since the start of the school year in September, there have already been more than 20 suicide cases. Hong Kong’s records in the past 30 years reveal the number of suicide cases involving people under the age of 19 was a single-digit figure in the 80s and it was not until the early 90s that the number rose to more than 10 cases a year.

Surveys indicate that nearly 30% of our primary and secondary students continually suffer from anxiety. In the year 2008-09, there were about 13,000 children and young people in Hong Kong who were psychiatric patients. Within six years, this number doubled itself to 26,000 in 2014-15. The situation, as it now stands, is worrying!

Family is supposed to be the best haven for young people. Unfortunately, single-parent families, broken families and problem families are very common nowadays. With parents working long hours to make a living, relationships among family members could be rather indifferent and apathetic. If the kid is the only child in the family, it would be even more difficult for him or for her to find someone to talk to.

Schools are supposed to be playing the role of another kind of family. However, the numerous new measures and policies introduced since the education reform have made teachers and students extremely busy, literally gasping for air. Many teachers have told me that self-evaluations of school and external school reviews vigorously pursued by the Education Bureau, together with the policy of class reduction and school reduction, have already significantly increased the workload and pressure on teachers. With teachers themselves worrying about job security and emotionally perturbed, it is difficult for them to spare extra time and make extra efforts to provide counseling support to students.

Apart from family and school factors, social factors should, of course, not be ignored. Undoubtedly, the young people of today mature earlier than the previous generation. They may have stronger views on public policies and on the quality of governance of the government. Many sociologists also think that there is a correlation between social factors and people committing suicide. With an uneven distribution of social resources and with policies slanted in favour of consortia, young people’s indignation against society will simply keep mounting.

As the Legislative Councillor representing the education functional constituency  and hoping to relieve the pressure on students and to enhance the breathing space for teachers and students, I suggest the following measures on our education system.

In addition to allowing more breathing space in the education system for teachers and students, what is essential now is to tackle students’ emotions and stress by working at various levels, including prevention, identification, education, support, intervention and counseling.

Over a year ago, the Legislative Council debated the motion of ‘Let our students have a happy childhood again’. In my speech, I pointed out that even though Hong Kong has made spectacular academic achievements internationally, our students are not happy because they do not have free time to do what they like. While our young people are supposed to be full of vigour and vitality and while they are supposed to be in the prime of their life, they are not growing up happily. This is highly lamentable. I would suggest that we take a hard look at ourselves, care for the people around us, and listen to their views.

To those of you who are in misery, in hardship or feeling depressed, feeling dejected, I would suggest that you pause for a moment, calm down, talk to your family, your friends, your teachers and social workers and seek support from them. Before I end this letter, I do hope you will remember this: life is precious. Please treasure your own life! Allow me say it once more: please treasure your own life!

Ip Kin-yuen is a Legislative Council member representing the education functional constituency. This is an edited version of his Letter to Hong Kong at RTHK broadcast on March 20.

Be the first to comment on "Give more breathing space to teachers, students"