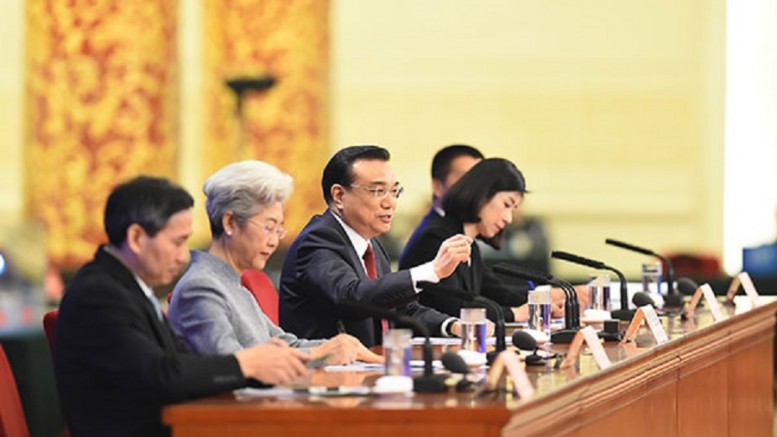 Dubbed by Western media as China’s rubberstamp legislature, the National People’s Congress ended its annual plenary session with the usual pomp, pageantry and tight security minus surprises. Even the dissenting votes against the government work report, the supreme court and top prosecutor’s office reports at the end of the session have been ridiculed by cynics as being scripted. The post-plenum press conference held by Premier Li Keqiang is no exception.

From the picking of reporters for raising questions to the questions they asked, they were carefully crafted for the Communist Party to convey a positive, upbeat message to their domestic and international audiences. This year’s post-plenum presser is no exception.

From China-US relations to cross-straits ties, Li is eagerly keen to assure the people of United States and Taiwan Beijing’s policies would remain unchanged irregardless of who has (DPP’s Tsai Ing-wen) and will (Democrats’ Hillary Clinton or Republicans’ Donald Trump, or someone else) come to power.

On the economic front, Li has assured China will definitely hit the target 6.5 per cent of GDP growth this year. There will be no hard-landing of the economy, he said, despite downward pressure of the economy.

It is along the theme of confidence-building that the Premier and the ruling party led by Xi Jinping have tried to calm the jittery Hong Kong community.

Hong Kong is not OK nowadays. All eyes were on the Premier’s press conference this year for a clue about Beijing’s latest thinking in the aftermath of the Mong Kok unrest, which broke out just about five weeks ago. That was followed by the defeat of a pro-Beijing candidate by pan-democrats’ Alvin Yeung Ngok-kiu and, more importantly, the seemingly growth of localism as reflected in the Legislative Council New Territories East by-election. The popularity of Edward Leung Tin-kei, a localist representing the Hong Kong Indigenous, and the votes he got is indicative of the growing support for localism among people from different walks of life, in particular the 15-30.

In a reply to a question from a mainland-based Phoenix TV reporter Li focused on the positives and sidestepped negative issues such as the Mong Kok unrest. He did not repeat the so-called “deep-seated contradictions” Chinese officials have often alluded to when talking about Hong Kong in his answer.

Instead, he gave a bullish view on Hong Kong’s future. “Hong Kong will maintain long-term prosperity and stability… I have confidence in a bright future for Hong Kong… I believe the Hong Kong SAR government has the ability, and the Hong Kong public have the wisdom, to handle the complex issues in Hong Kong.”

Beijing, he said, “will continue to uphold ‘one country, two systems’.”

‘The sky will not fall’

Li’s markedly moderate stance on Hong Kong did not come as a surprise. NPC chairman Zhang Dejiang and Hong Kong and Macau Affairs Office Wang Guangya have also been mild when they talked about Hong Kong on various occasions during the NPC session.

It reflects Beijing’s keenness not to pour oil to fire and provoke fresh disputes in the city to help lessen pressure on the Leung Chun-ying administration and the pro-establishment camp. That is likely to be Beijing’s approach in the lead-up to the Legislative Council election in September.

Faced with the increasingly complex environment in Hong Kong and the negative impact of their hardened policy on pro-establishment candidates in the Legco election, Beijing has taken a safe approach reaffirming the basics in their Hong Kong policy.

The fact Beijing officials have refrained from wading into such issues as universal suffrage, Mong Kok unrest, localism and independence does not mean they feel happy and relaxed about the Hong Kong situation.

It is more plausible that there are a lot more pressing, difficult and important issues on the plate of the Beijing leaders for them to spare time on Hong Kong, at least in the near term.

Also importantly, Beijing leaders may now have less confidence in finding solutions to problems in Hong Kong. Zhang Xiaoming, the central government’s Liaison Office director, has said “the sky will not fall” when he commented on the vetoing of universal suffrage for the 2017 chief executive election last year. It says something about the mood of Beijing towards Hong Kong.