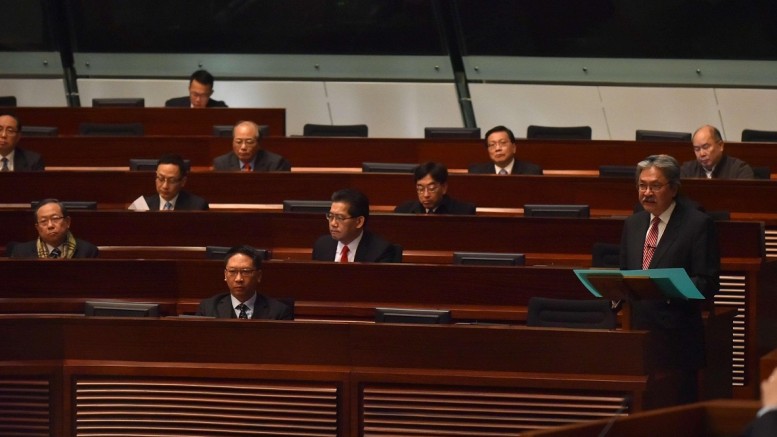 Financial Secretary John Tsang Chun-wah delivers the 2016/17 Budget at the Legislative Council on Wednesday. He took a moderate line on the Mong Kok unrest, which is markedly different from the stance of Chief Executive Leung Chun-ying.

How to find a balance in the Hong Kong society in times of growing conflicts and hostilities in the political and socio-economic landscape has been likened as mission impossible.

In his 2016-17 Budget delivered on Wednesday, Financial Secretary John Tsang Chun-wah has shown wisdom and courage in making an attempt to do so, addressing a host of divisive issues including the Mong Kok disturbances and localism. Arguably, he has silenced pessimists, making a case that an impossible task could be made possible.

With a HK$30 billion surplus for the 2015-16 financial year and massive reserves, Tsang handed out a package of sweeteners that benefit almost every citizen and business to cheer them up amid growing anxiety about the city.

The HK$38.8 billion laisee money covers a salaries and profit tax rebate, a waiver of business registration and licence fee and livelihood levies such as rates, and increased allowances for the elderly and low-income families. It is aimed to ensure different strata of the society feel they have not been ignored by the government.

Thanks to the city’s massive reserve, Tsang can afford the generosity in pleasing most, if not all.

After Occupy, Tsang wades into ‘riot’

Like last year’s Budget, Tsang has ventured into politics, and skilfully expounded why it is important to the economy and overall developments of the city in 2016.

In last year’s Budget, he made reference to the Occupy Central movement. In this year’s blueprint, he gave his thoughts on the burning issue of the time – the Mong Kok mayhem – in the opening and closing remarks of his speech.

In his opening remarks, he stuck to the hardline stance given by Chief Executive Leung Chun-ying. In a strongly-worded illustration of the clash, He said: “A handful of people lost their rationality and attacked the police officers and reporters that were present, provoking a large-scale riot and causing dozens of injuries.”

But when concluding his speech, he took a markedly moderate and balanced view, and refrained from putting all the blame on the rioters.

While echoing people’s feeling of suffocation and helpless about the tiresome confrontation in the city, Tsang said: “What we are facing today is the result of a raft of intricately-related factors.

“We need to look squarely at these factors in resolving the differences and, more importantly, we need to have the determination to resolve these conflicts.

“If we should allow the situation to get worse, what lies in store for Hong Kong will be even greater chaos, and our future generations will grow up in the midst of hatred and malice.”

Tsang cited late U.S. President John F. Kennedy to appeal for a sense of togetherness to overcome the difficulties. Without mentioning the role of government, he explained at the press conference “everyone, you and I, have responsibility.” Mr Kennedy said: “Our problems are man-made, therefore they can be solved by man.”

Not surprisingly, some pundits have described his speech as an election manifesto for the 2017 chief executive race.

Repeated asked if he planned to challenge Leung, who is widely tipped to run for his second term, next year, Tsang has declined to comment further. He insisted he has already replied to the question many times before. He refused to put it on the record again, saying at the post-Budget press conference journalists would not believe what he said anyway.

With the next CE election drawing near, it is inevitable, and only natural, that the deeds and words of potential candidates such as Tsang, will be deciphered for a clue about their plan.

But it sounds premature and hardly convincing at this stage to draw any conclusion on Tsang’s election bid from his remarks on the Mong Kok unrest.

With no sign of a softening of Beijing’s stance on Hong Kong issues, any conciliatory acts and words by top officials and key political figures on the alleged riot would be deeded political incorrect by the power that be.

Contrasted sharply with those of Leung, Tsang’s comments have also fuelled speculation about their potential rivalry in the 2017 race.

Judging from the community’s immediate feedback, Tsang has succeeded in winning applauses from people for his fair, balanced and pragmatic assessment on the Mong Kok unrest and, also importantly, his advocacy for moderation and advocacy.

That will be a valuable political asset to him irregardless of his next endeavour after his current term ends next year.

Be the first to comment on "Tsang strikes balance in Budget, Mong Kok unrest"