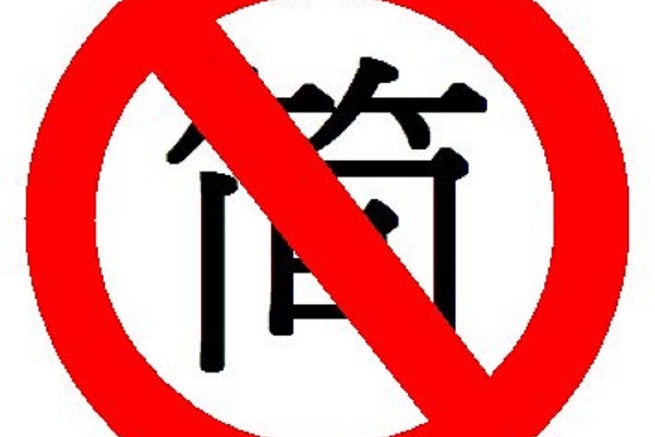 A fresh row brews over an idea floated by the Education Bureau for stepping up learning of simplified Chinese characters.

At a time when strain and suspicions have prevailed in mainland-Hong Kong relations, it is not surprising that the Education Bureau’s idea of promoting the learning of simplified Chinese commonly used in the mainland in the city’s schools has caused a stir.

Scholarism, a group founded by secondary school students, has questioned whether there is a political agenda behind the idea. They fear it is aimed to pave the way for switching the medium of teaching for Chinese Language from Cantonese to putonghua.

Some educationists and parents’ groups are up in arms against the idea, which they say could cause confusion and immense practical difficulty in students’ learning.

on Monday, Legislative Council President Tsang Yok-sing waded into the debate. In his regular column published in the Chinese-language AM730, he warned of “confusion in thinking” if the idea of learning simplified Chinese was raised without thorough consideration and deep thinking.

Tsang, who was a school headmaster before he switched to politics, noted that calls for teaching Chinese-language subject in putonghua has already sparked a row in the society.

He said although the bureau’s Curriculum Development Council has not specifically stated that simplified Chinese should replace traditional Chinese in their consultative document the idea to set out learning simplified Chinese as one of the objectives of teaching Chinese might cause concerns.

Tsang said: “The education authorities should study thoroughly the issue of effective teaching of simplified Chinese followed by the setting of objectives of teaching if they have come to a view that students must learn how to read simplified Chinese.

“If the idea is rolled out without thorough thinking, it will only cause confusion. This is exactly what is happening now,” he said.

In a consultation document published in December for the just-ended consultation, the Curriculum Development Council said students should be able to read simplified Chinese to widen their reading range and foster better communications with the mainland and overseas.

Both the council and education officials have not explained whether students and society at large are deficient in reading simplified Chinese and, if so, how that has hindered communication between the two places.

The fact is many Hong Kong people who learn and use traditional Chinese can easily learn on their own in reading simplified Chinese if they want to. Many have done so because of work or study need or for personal interest.

That the education officials is keen to give a big push to the teaching of simplified Chinese in schools is obviously driven by the political imperative of “fostering better communication” with the mainland, as championed by Chief Executive Leung Chun-ying since he took office.

But like many other initiatives aimed to cultivate closer mainland-Hong Kong ties, the idea of learning simplified Chinese has done the opposite. It has bred suspicion and anxiety in some quarters of the society about integration.

Officials will only have them to blame because of their muddled thinking, inadequate preparation and poor communication skill.

Photo: Picture taken from the Facebook of an anti-simplified Chinese group