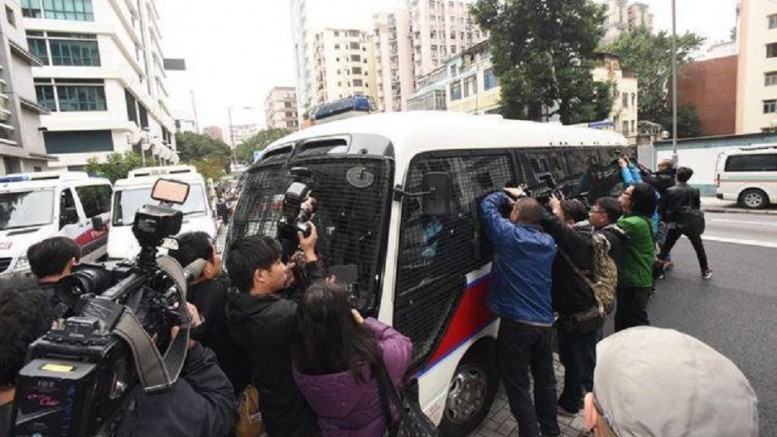 Alleged rioters in the Mongkok disturbances on Lunar New Year's Day are taken to court. They face rioting charges.

Hong Kong people greeted the beginning of the Year of the Monkey with a heavy heart. Scenes of violence and ugly clashes between police and alleged rioters at the heart of Mongkok in the early hours of Tuesday have shocked the society.

Despite the fact that the disturbances the government has branded as riot was ignited by a dispute over illegal food hawking, it is clear that is the least important factor behind the confrontation. A host of deep-seated conflicts that had underpinned the Occupy Central protest and being left unresolved, and indeed unattended, thereafter has erupted again – in a more violent manner.

In many aspects, the Mongkok riot is a wake-up call to the society, Chief Executive Leung Chun-ying and his team and the central government for all to face the problems squarely and find solutions.

Notwithstanding the differences between the Occupy Central, dubbed by some Western media as Umbrella Revolution, and the Mongkok riot they coined as Fishball Revolution, the depth of socio-political discontent prevalent in the society in the recent years is the common thread.

A senior retired government official has lamented a few months after the end of the civil disobedient protest he was disappointed that the government and society at large have not done “really deep analysis on what happened (during the Occupy movement) last year (2014).” “Nobody talked about it, what happened, why it happened. It’s amazing to have some people sleeping out on concrete in Central for three months… We do not really know what happened.

“We should try to find out. Maybe we would not like what we discovered,” he said.

There is no doubt the police has done their own post-mortem on their operation, dubbed as “Solarpeak.” Among others, they have sought funding for anti-riot equipments such as water cannon and surveillance devices. Police and Justice Department officials have been busy taking the culprits of the unlawful protests to courts.

No deep analysis on Occupy protest

Leung and his team and the central government, however, seem to have no interest in finding out the socio-political causes behind the 79-day uproar.

True, officials have pledged to step up their work among youth to foster communication and address their concerns following the protest kicked off by two students groups. It remains talk without a lot of walk.

Worse still, the hardened stance and approach of the central government in handling Hong Kong policy and the Leung administration’s hardball tactics in dealing with political dissent inside and outside the Legislative Council has aggravated distrust towards the central and Hong Kong authorities.

An air of growing distrust in the government, the political system and problem-solving mechanism has provided a climate conducive to the advocacy of non-peaceful means in protests aimed to challenge the authority and subvert the systems.

The increase of the use of force in rallies and demonstration has been reciprocated by more merciless responses from the police, resulting in a vicious cycle of violence in protests.

Violence has no justifications

However understandable the grievances of the rioters and protestors are, they can never justify the use of such violent acts as throwing bricks and setting fire in streets. The chorus of condemnation among different sectors and groups, some representing different political viewpoints, against the violent should send a sharp reminder to the rioters about the level of people’s tolerance of radical politics.

On Thursday, the government has laid charge of rioting against 36 people in a magistrate. If convicted, they may face harsher sentences of years in jail.

By branding the protests as riot and charging protestors for rioting, the Government has tried to send a no-nonsense message there will be no mercy for the participants who have breached the law.

With the use of violence in protest escalating to a level unacceptable to the mainstream society, the Government is eagerly keen to hit hard on protestors they deemed as trouble-makers by invoking the riot law.

At a time when the wounds inflicted by the Occupy Central movement are not yet healed, the new round of arrests and prosecutions in the wake of the Mongkok riot will pour salt to wounds.

Hong Kong is a rules-based society. The Government is obliged to invoke law to maintain order as and when necessary. Whether invoking the harsher riot law is justifiable when it comes to evidence will be a subject of fierce argument in courts. Some in the community would hope to see the government acting tough to assert their authority and uphold law and order.

That said, the Government should adopt a soft approach to seriously listen and address the grievances and concerns of the society. The price to pay for government inertia and misjudgement towards public discontent in the past few years has proved to be huge.

Despite Beijing’s praises for Leung’s handling of the Occupy Central protest, it is inconceivable that they genuinely think he has done a great job. Facts speak. It is unfair to blame the long list of political, social and economic woes on Leung. But it is fair to say Leung’s governance has not only failed to resolve the contradictions, but worsened the conflicts.

To Beijing, the Mongkok riot is a wake-up call for soul-searching on their policy towards Hong Kong and assessment on the suitability of giving Leung five more years to run the city.