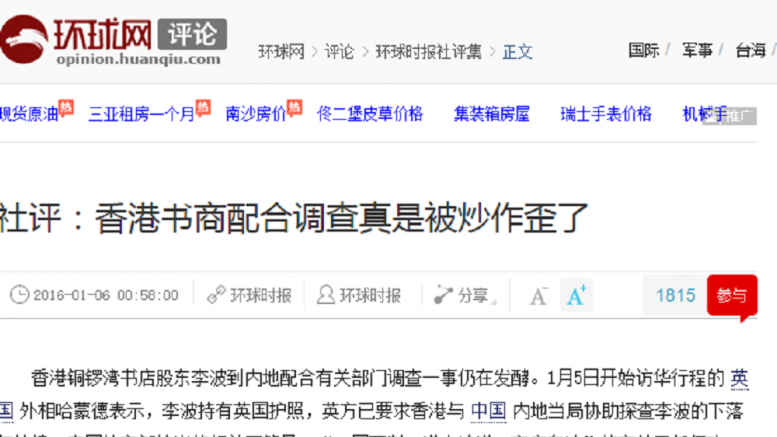 The official Global Times says the policy of "two systems" is not designed as a shield for people to attack the principle of "one country."

The official Global Times has dimmed hopes that Hong Kong people can be shielded for protection under the city’s laws for activities that are deemed by the Chinese Government as a threat to national security.

Seeking to put the row over the “missing booksellers” case in the political context in an editorial on Wednesday, it said those Hong Kong people who have a penchant for adversarial politics should have no illusion that the policy of “two systems” is above the principle of “one country.”

Wednesday’s commentary is the third in a row by the Global Times, known for its nationalistic stance, on the brewing controversy over the mysterious disappearance of Lee Bo, a shareholder of the Causeway Bay Books, and his four partners and staff in the last few months.

Lee’s wife withdrew an earlier request for police help after a friend was reportedly in touch with Lee, who went missing since last week. Lee said in a hand-written note he returned to the mainland in his “own way” to help an investigation.

The mysterious case has rubbed the most sensitive nerves of Hong Kong people about the protection of certain important individual rights concerning freedom of movement, speech and publication. It has raised serious questions locally and in the international community about the reality of “one country, two systems” policy 18 years after it was implemented.

Noting that the truths of the saga are still difficult to be ascertained, the Global Times has sought to argue it is not a purely domestic matter of the Hong Kong Special Administrative Region.

It said: “Although the Causeway Bay Books operates in Hong Kong, its publication and sales of political books are, to a large extent, targeted at the mainland. The truth is their pair of legs has straddled over the Hong Kong and mainland societies.

“It (the bookstore) has created interference over the task of upholding order in the mainland. It has undercut the foundation of the mainland’s rule of law system. It is ‘reasonable’ and legal for the mainland (authorities) to launch investigation.”

Referring to Lee’s return to the mainland in his “own way,” the newspaper claimed

“power organs” all over the world have ways to circumvent the law for someone who are wanted for investigation to “coordinate” with them.

“If certain forces in Hong Kong have tried to make use of the provisions in law to confront with the nation, it is difficult to tell when they will cross the line of dangerous zone. Ordinary people, who are not prepared to play the game of political struggles, should not push themselves to the limits (of the dangerous zone.)”

“Those who are fond of adversarial politics must have a clear thinking about the essence of ‘one country, two systems.’ They should not hold any illusion that ‘two systems’ is above ‘one country’, and believe that they will be OK if they do anything that endanger the mainland in Hong Kong.”

It said: “Fairly speaking, Hong Kong’s legislature has vetoed an universal suffrage blueprint based on the central government’s views. Some political activities that will not possibly happen in the mainland took place in Hong Kong. Look around the world, is there another ‘highly-autonomous region’ that is so different from its sovereign nation?

“It’s regrettable that a case of ‘coordination with mainland investigation’ has caused a big fuss. It is a reminder to the mainland authorities about the complexities of the Hong Kong question. But the trend of integration between the two places will continue to move forward.”

If the case has stirred unease among Hong Kong people, it is because of its peculiar circumstances. Importantly, it is also because of such editorials in Global Times that have reflected the latest thinking of the mainland officials about Hong Kong, which do not augur well for the “one country, two systems” policy.