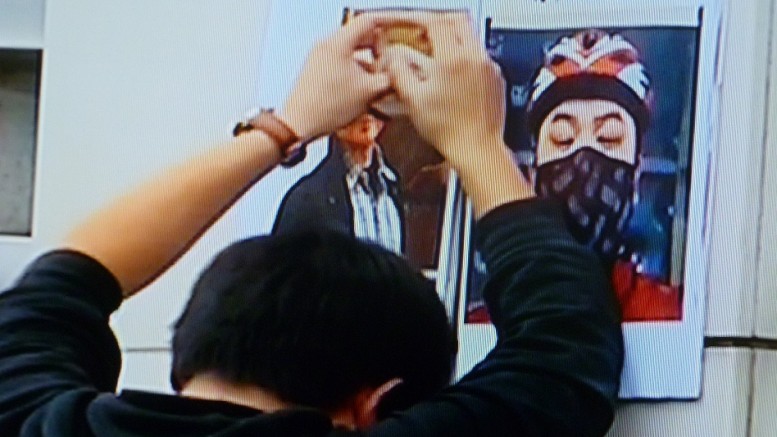 Protesters stage demonstration outside the central government's Liaison Office against the alleged mainland enforcement of law relating to the disappearance of owners and staff of a bookstore in the city.

Flashed back to the pre-1997 era, Hong Kong was blanketed by an atmosphere of anxieties and doubts. People felt anxious about the reversion to Chinese sovereignty at the stoke of midnight of July 1, 1997. They were doubtful about Beijing’s pledge of “one country, two systems.” Late veteran Democrat Szeto Wah, who had spearheaded an alliance fighting for a democratic China, feared he would be among the first to be locked up in jail after the handover. That had not happened. He passed away five years ago, and did not live to see his worst fears about the “one country, two systems” may indeed come true.

Reports of the mysterious disappearance of an owner of a bookshop that sells books banned in the communist-ruled mainland have deepened fears that a crackdown against political dissent has begun in earnest. Circumstantial evidences show fears that mainland security officers having enforced mainland law in the city might not be unfounded.

A Hong Kong delegate of the National People’s Congress Fanny Law Fan Chiu-fun said on Sunday it would be a serious violation of the “one country, two systems” policy if mainland authorities have carried out duties in the SAR.

Lee Bo, 65, a majority shareholder of the Causeway Bay Books, went missing last week. It followed the disappearance of his four associates in strange circumstances in the last few weeks.

Compared with Szeto and his allies in the Hong Kong Alliance in Support of Patriotic Democratic Movement in China that Beijing has branded as subversive, Lee Bo and his associates and their bookstore are nobody in the city’s political scene.

They have hardly posed a threat to national security and the legitimacy and authority of the ruling Communist Party. Some may deem the bookshop that sells books critical of the Party and the dark side of the country under its rule as a no small embarrassment to the leadership under President Xi Jinping.

That they are allowed to operate is a testimony to Beijing’s pledge for post 1997 Hong Kong. Just a fortnight ago, Xi told the city’s Chief Executive Leung Chun-ying that Beijing would strive to ensure the “one country, two systems” policy will not be “distorted” and “become deformed” when implemented.

Reports of the troubles faced by the bookshop owner and his associates, however, make a mockery of Xi’s pledge. Their plight has deepened fears that Beijing’s negation of its promise of highly-autonomous powers for Hong Kong is just a matter of time. That time has come.

June 4 vigil a symbol of a special Hong Kong

More than 18 years after 1997, Beijing’s tolerance of a free and open Hong Kong society has worn thin as its unease about the perceived threats to security and stability in the mainland and the city grows.

Both before and after 1997, Hong Kong has thrived on the mere fact that it is different in many important aspects from the rest of the country. Every June 4, people are allowed to attend public vigil in remembrance of the victims of the Tiananmen Square crackdown. The Victoria Park vigil has emerged as an annual ritual that has symbolised the “one country, two systems” policy is alive and working well.

The disappearance of the bookshop owner and associates has added gloom to the city in the midst of growing jitters about the fate of “one country, two systems” policy.

The feeling of doom and gloom has and will grow deeper if the Government fails to stand up to defend the city’s freedoms and values and uphold the integrity of the Hong Kong system Beijing has promised to preserve.

Top Hong Kong officials including Chief Secretary Carrie Lam Cheng Yuet-ngor have stressed that police is looking into the case and seeking information from the Shenzhen authorities. However, they have refrained from commenting on the alleged enforcement of law by mainland authorities in the city.

Cynics and critics query about the government’s resolve to fight for the city’s best interests, citing the fact that the case is now being handled by a police unit in charge of missing persons cases.

The seemingly low-key approach in government’s handling of a case that hinges upon the high politics of “one country, two systems” sounds ironical, but hardly surprising in view of Leung’s allegiance of loyalty.