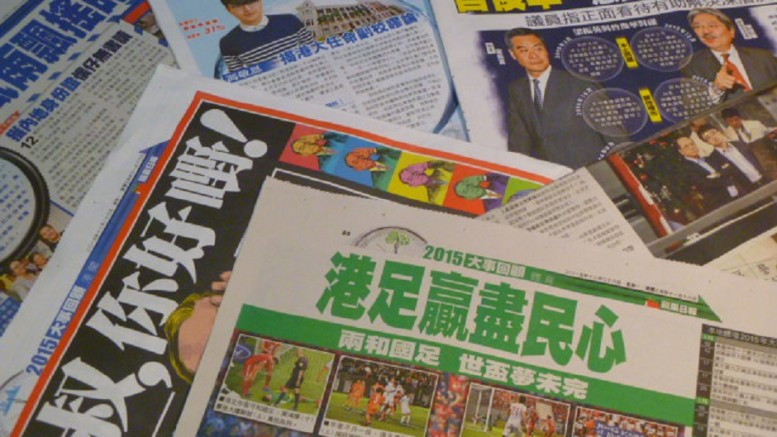 Winners and losers make headlines in 2015.

It is time for a recap of the winners and losers in Hong Kong in 2015. Below is my pick – without fear and favour:

Faced with derision by certain mainland sports-related cadres for its “multi-layer” line-up, the racially-diverse Hong Kong football team were in one heart frustrating the Chinese national team with a draw in both the home and away World Cup qualifier matches. Though weaker when it comes to skill, the Hong Kong team has outshone the national counterpart with their fighting spirit and resolve not to concede a goal. They have won the hearts of Hongkongers and have galvanised the Hong Kong spirit and identity.

They may be vaguely-defined and loosely-organised, if they consider themselves a group at all. The so-called “umbrella soldiers”, referring to the bunch of fresh faces emerging in the aftermath of the 79-day Occupy Central movement, also described as Umbrella Revolution/Movement, have breathed fresh air to the political scene in the November 22 district council elections. Although the young, fresh squad has scored few seats, they have done well in terms of votes. Importantly, they scooped a couple of headline-grabbing constituencies, unseating loyalists including “tree gun” Christopher Chung Shu-kan of the DAB.

Confronted with hostilities and opposition from the pro-Beijing force against the recommendation of him to the post of HKU pro-vice-chancellor, former University of Hong Kong head of law school Johannes Chan Man-mun has lost the battle. The Council vetoed the recommendation by a search committee. Chan, nevertheless, won the war with his steadfast insistence on the principle of institutional autonomy and academic freedom and pressure for him to bow out from the selection on his own. His case has spurred tens of thousands of alumni, staff and students of the top university to band together fighting for him and, more importantly, the values and principles vitally important to HKU and Hong Kong as a whole.

Billy Fung King-yan, chairman of the HKU student union, was roundly condemned by big shots in the university’s Council and such big mouths as film director Wong Jing for spilling the beans. Fung broke the secrecy rules of the Council at the end of a meeting in September by revealing who said what about the candidacy of Johannes Chan for the top HKU post. Among others, prominent liver transplant expert Lo Chung-mau was said to have rated Chan lowly because of his failure to comfort him after he fell on the floor amid chaos at a Council meeting in July. Breaking the confidentiality rules aside, Fung was accused of distorting what some Council members have said. One Council member questioned Fung’s ability in English listening. Audio clippings leaked and carried on the media later have vindicated Fung’s ability in getting his English right and righting the wrong in matters of principle.

Opinion polls show the Legislative Council as a whole has suffered a decline in popularity. Cynics have dubbed it is no longer a “lap fat (lawmaking) council”, but  “lap sap (rubbish) council” for having failed to do their job. Filibustering, meetings cancelled for lack of quorum and chaos at CE’s question-time have become the new normal. Yet President Tsang Yok-sing has survived apparently not just unharmed, but arguably with gain in popularity. He consistently took the top ranking in popularity polls among lawmakers. Despite his repeated denials, he has been named as a potential candidate for the 2017 chief executive race. While dampening expectation for him to bid for the top post, Tsang has succeeded in shifting people’s focus onto his new baby, a think-tank aimed to give policy options to the next chief executive. Call it “king-fisher”, not king-maker, he said.

John Tsang, the “God of Wealth” whose official title is Financial Secretary, is obviously in no mood to contest with his boss, Chief Executive Leung Chun-ying. He probably doesn’t care what Leung has said and thinks. Seen from that perspective, Tsang has probably lamented that he became a reluctant winner in the media-orchestrated popularity race between the two in the past 12 months. Media and political pundits gave their verdict on the deeds and words of the pair on a list of issues including “localism”, Hong Kong-mainland World Cup qualifier match and punitive stamp duty levies. Judging from popularity polls, Tsang won by a big margin.

Lau Wong-fat, former chairman of Heung Yee Kuk, has received unwanted public spotlight for having arrived late at a Legislative Council vote on the government’s political reform blueprint. A group of pro-establishment lawmakers had staged a miscalculated walk-out minutes before the vote took place. They wanted to force an adjournment due to a lack of quorum for them to “wait for Uncle Fat” for the vote. The rest is history. It is still unclear whether Uncle Fat did ask his allies to delay the vote for his return. It is inconceivable that he would have possibly asked for an exodus en masse at all cost.

Former chief executive Donald Tsang Yam-kuen was a happy man attending a grand military parade in Beijing in September. His image and reputation have plunged into uncertainty days later when he was formally charged of misconduct in office. Tsang has vowed to fight for his innocence. Regardless of the outcome of the case, the success story of the “Hong Kong boy”, who was a self-proclaimed “lonely salesman” before he took the top job in 2005, has been tarnished, to say the least.

Former home affairs minister Tsang Tak-shing and civil service chief Paul Tang Kwok-wai have become the unlikely victims of a mid-term reshuffle orchestrated by Leung Chun-ying. Both lost their job in mid-2015. Officially, they were said to have tendered their resignation for personal reasons. Tsang’s exit has sparked angry words from his government colleagues and supporters in the pro-Beijing camp privately and publicly. Tsang’s brother, Tsang Yok-sing, has refuted claims that Tsang has asked for an early departure. Some unnamed government colleagues have also rebuked criticism from “fans of Leung” against Tsang’s performance. Meanwhile, Tang has also been seen as a scapegoat for Leung’s bad relations with civil servants. They won sympathy.

Education chief Eddie Ng Hak-him, who was given the nick name “No-good Ng” for his incompetence and low popularity, was an unlikely survivor in Leung’s cabinet reshuffle in mid-year. Consistently low in popularity rating, Ng has been the subject of bad publicity in the last few months after parents mounted an online campaign to call for the abolition of TSA, or Territory-wide System Assessment, for Primary 3 and 6 pupils. The poor handling of his bureau and education department has made thing worse. Citing prior engagement, his absence from a Legislative Council hearing on TSA has caused a stir. He has invited more ridicule and harsh words after he revealed on his Facebook he was away for a pleasure trip in Japan during the time. In another self-goal, Ng called police last week complaining of “threats” from two “unknown” persons, who later told police they were reporters from the Apple Daily. Given his long-time experience in public service, Ng sounds too stupid sometimes naive if he honestly does not know the pair are journalists. If he did know and decided to ask police intervention, he is dishonest. Is it a case of stupidity and naivety or dishonesty? Or both?

Be the first to comment on "2015 winners and losers"