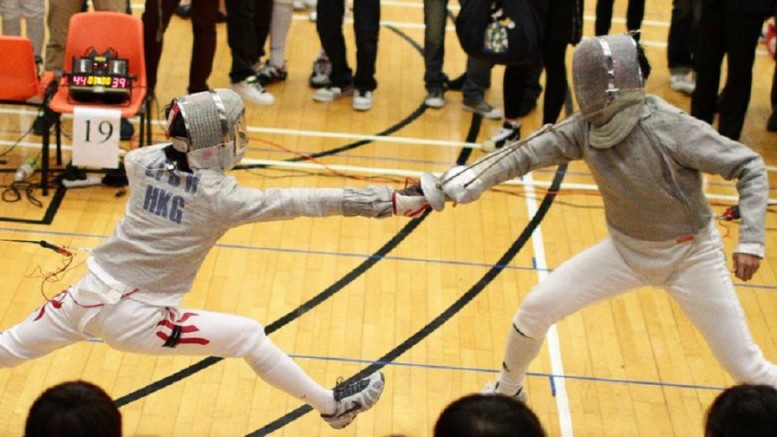 Out of a sense of brotherhood, John Tsang teaches fencing at his alma mater La Salle College. He says that sense has a lot of similarities with 'localism.'

John Tsang Chun-wah, full-time Financial Secretary and part-time fencing coach at his alma mater La Salle College, has made a masterly strike against attackers of the rise of the so-called “localism” sentiments in the society.

Wading into the hyper-sensitive issue, he said the sentiments could be turned into a positive driving force for the betterment of the city.

Known as a fencing master and fan and a distinguished “La Salle Boy”, Tsang shared on his blog an annual alumni dinner at an earlier weekend and recollected the lessons he learned from tutoring fencing students at La Salle in the past three decades.

From fencing to track and field, football to swimming, he said enthusiastic alumni part-time tutors have at times even outnumbered student athletes at training sessions. “The driving force behind their selfless contribution is the sense of brotherhood.”

“Every time when I sang school song or chanted slogans at an alumni event, I feel strongly the near-fanatic sense of belonging. There are a lot of similarities (between the feeling) and the so-called ‘localism”, which is popular recently.

“Both feature strong feelings and sense of pride with their own identity, tradition and culture. Such feeling exists in nations and schools.

“In the La Salle family, those feelings and sense of pride have evolved into a positive force that has motivated La Salle Boys from every generation to make selfless contribution to our alma mater.

“I believe the same feeling and sense of pride exist in the hearts of every Hongkonger. Their deep feelings towards Hong Kong can also be united to become a positive, constructive force to make Hong Kong a better place and benefit the city as a whole.

“(Such feeling and sense) should not become just a closed, negative and even destructive (form of) protectionism,” said Tsang.

The positive spin of Tsang over the growth of “localism” contrasts markedly with the negative politics-speak of the socio-political trend by Chief Executive Leung Chun-ying and the pro-Beijing loyalists in recent years.

The “localist,” or “nativist” activists have been demonised by some hard-line loyalists as pro-independence activists.

Eyebrows were raised when Leung singled out Undergrad, a monthly student magazine published by the University of Hong Kong’s student union, warning that the magazine’s previous publication advocating “self-determination” for Hong Kong will lead to “anarchy” in the city.

He has condemned activists protesting against cross-border parallel good traders.

Speaking at another occasions last year, Zhang Xiaoming, head of the Central Government’s Liaison Office openly denounced the idea of “Hong Kong independence,” stressing that despite Hong Kong’s high degree of autonomy, resistance against the rule of the central government is strictly forbidden.

Although both Leung and Zhang stopped short of commenting specifically on “localism,” they have warned of the danger of the trend of separating the city from the mainland.

Against the background of growing sensitivity of the prevalence of “localism” thoughts in the society, Tsang’s attempt to put it in a positive prism will no doubt win some applause from Hongkongers who see nothing sinister in feeling strongly about the place they belong to. But he runs the risk of putting himself at the target of strikes from “localism-bashers” by loyalists in the city and the mainland authorities.