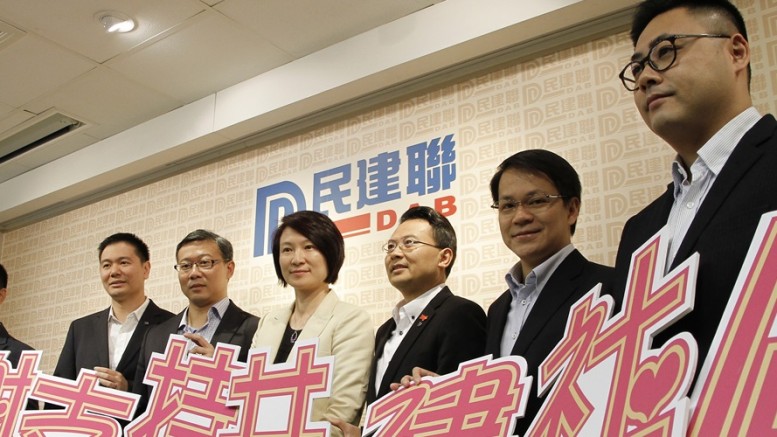 Democratic Alliance for the Betterment and Progress of Hong Kong chairwoman Starry Lee leads her team to say thank-you to voters. She says their district council election results are 'OK.'

Every vote has been counted, the results of the November 22 District Council elections declared. The contest is over. It is not.

Make no mistake. There are no legal challenge as of now against any result of the 431 seats up for grab. But 10 days after the Sunday polls, who the winner and the loser in the quadrennial district polls are has emerged as a subject of post-election game.

In his column published in the Chinese-language Ming Pao on Wednesday, a close adviser to Chief Executive Leung Chun-ying sought to count the ballots to set the record straight. Citing results, Executive Councillor and head of the One Country Two Systems Research Institute Cheung Chi-kong said: “With those results, if the pro-establishment camp is not deemed as the winner, who can be the winner?”

Of the list of 226 candidates endorsed by the pan-democrats, Cheung said only 105 won. “The success rate is less than 50 per cent. The total number of seats, or 105, only constitutes 24 per cent of the 431 seats in all district councils. That’s less than one-quarter.

“By any standard, the pan-democrats have lost, especially when we take into account the high turnout of 47 percent.”

Cheung further cited the loss of six “military general-grade” pan-democrats as a case in point. They include Albert Ho Chun-yan, a former Democratic Party chairman; Frederick Fung Kin-kee, chairman of the Association for Democracy and People’s Livelihood; Erica Yuen, leader of the People Power and Kenneth Chan Ka-lok of the Civic Party. Two other heavyweight figures who lost were Wan Siu-kin, vice-chairman of the Democratic Party and Chan Shu-ying, a veteran in the party’s Kwai Tsing stronghold.

“Even if it is not case of ‘vote them out,’ it is a case of voters having not ‘voted them in’… If the loss of six military general-grade officers is not a defeat, what constitutes a defeat?” Cheung said.

Cheung was ostensibly referring to an oft-cited, but much-criticised slogan uttered by Leung Chun-ying in the aftermath of the vetoing of the political reform blueprint. Asked what could be done to tackle the filibustering of some radical lawmakers at a business luncheon, he urged voters to “vote them out” in next year’s Legco election.

Cheung has insisted he was not attempting to win a verbal match, but to argue the pan-democrats have already reached a cul-de-sac. “They will only be making turns at the cul-de-sac and cannot get out of it if they only keep claiming victory.”

His claim of victory for the pro-establishment camp echoed a report by the official Xinhua news agency two days after the election. Its headline read the “loving China, loving Hong Kong” camp has become the ultimate winner in fiercely-contested district council elections. In another positive spin of the election results, Xinhua has published a lengthy interview of Chan Wing-yan, the 25-year-old candidate from the leftwing Federation of Trade Unions, who knocked out Frederick Fung. The 2,600-word interview is seen as a showcase of the success of the loyalist camp in grooming young talents such as Chan, who is also backed by the Democratic Alliance for the Betterment of Hong Kong (DAB).

The upbeat remarks by Xinhua and Cheung, however, are in ironical contrast with the mood of the flagship DAB. DAB chairwoman Starry Lee Wai-king has described the results as “OK” at a post-election press conference. Privately, some pro-establishment figures said the results are “not OK” because they had expected better results, or more precisely, a heavier blow to the pan-democrats.

Lee was given the order to do well in elections when she led a party delegation to meet with top leader Zhang Dejiang in Beijing on July 27. Zhang has urged the pro-establishment camp to unite and to score good results in elections and to give more attention to recruiting young people, professionals and middle class to help strengthen their team.

Lee, who took the helm of DAB from veteran Tam Yiu-chung this year, have had to be modest in view of the embarrassing defeat of two lawmakers, Christopher Chung Shu-kun and Elizabeth Quat.

But the official propaganda machine and close advisers to Leung cannot afford modesty for political reasons.

If the loyalist camp did not do well in the election, the question to be asked is: who should be held responsible? Who said “vote them out”, but has failed to do so? Seen from that light, anyone wants to bet on the verdict of who the winner of the election is in the reports by the central government’s Liaison Office and Leung to President Xi Jinping?

Be the first to comment on "The election is over, the winner is …"