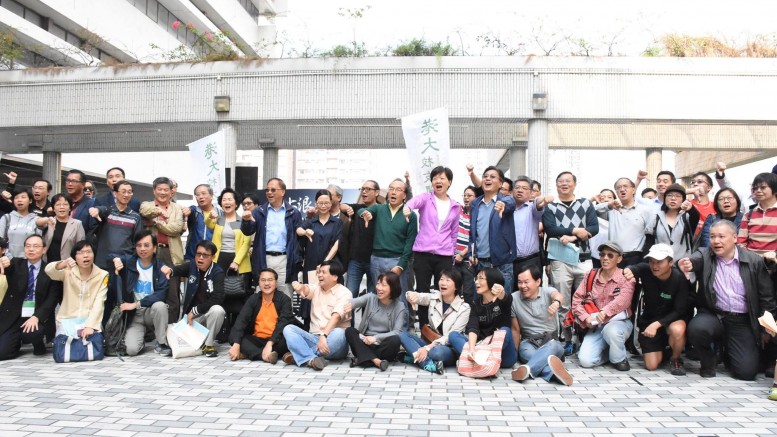 Alumni of University of Hong Kong, including Anson Chan, stage a rally on Sunday to lobby support for a list of motions. One says no to Arthur Li's appointment to HKU council.

The graduates and staff of the University of Hong Kong have spoken. They say no to the much-publicised plan by Chief Executive Leung Chun-ying, who is the university’s Chancellor under the law, to appoint Professor Arthur Li Kwok-cheung as the chairman of the governing Council. More than 4,400 members of the Hong Kong University Convocation cast their votes on a list of motions at an extraordinary general meeting on Sunday. In one of them, 97 per cent voted in favour of a motion that says Li is not suitable to be the next council chairman.

Although the results of the vote are hardly surprising nor legally binding, the enormity of the opinion of the HKU family against the appointment of Dr Li will no doubt put more pressure on Leung for him to rethink his plan. In a nutshell, Leung is caught between a rock and a hard place.

That the post of the council chairman has left vacant for more than two weeks after Leong Che-hung stepped down on November 6 is a clear sign that Leung is still eagerly keen to install Li on the hot seat. Leung and his aides may have no idea about what would be the good time for making the much-delayed, highly controversial appointment. They know now is not the right time.

Leung seems to remain convinced Li is the best possible candidate for the top post. On its surface, Li has an impressive record. He is a former head of the Chinese University of Hong Kong and a former education minister during the reign of Tung Chee-hwa. He sits on Leung’s Executive Council.

Importantly, he is a tough guy who has guts to make difficult decisions, fight fierce battle with his opponents to get things done. It doesn’t matter whether or not he is a yes man to Leung. The most important thing is that the pair think alike, act alike. By naming him to the helm of the decision-making Council, Leung is keen to send a no-nonsense message to the university staff he is not in the mood of naming a nice guy to replace Leong. Instead, he wants to appoint a strong man to put the university back on what he deems as the right track.

But if Leung seems to have become hesitant about his choice or at least about the timing of the appointment, it is because voices against the appointment did not just come from HKU staff and alumni and the pan-democratic camp but the pro-government circle. Some pro-government legislators have expressed reservation and urged Leung to reconsider.

Rumour has it some pro-establishment figures who have the ears of central government officials have lobbied Beijing against the appointment behind the scene. There have been no indications Leung may back down, nevertheless.

The source cited Leung’s decision to put Junius Ho on the Lingnan council as a case in point that shows the fighting mood and uncompromising style of Leung.

Set against that background, Leung will deem a reversal of his plan to appoint Li as council chairman as a heavy blow to his game plan for fixing the government-funded universities and, also importantly, his authoritative style of governance.

But the political price to pay for acting against the overwhelming wish of HKU staff and alumni, many of whom are elites in different sections of the society, will be huge and unfathomable. It will be cited as yet another example of Leung’s failure in fostering social harmony.

In view of the clear signs of Beijing’s interference in the appointment of Johannes Chan Man-mun as a pro-vice-chancellor, there are reasons to believe Leung has had Beijing’s blessing in his plan to fix the problems in universities. But now that his plan has run into a wall of opposition, it is anybody’s guess on whether Beijing would waver or ask Leung to readjust his strategy.

How Leung handles the appointment of council chairman may shed some interesting light on his governance approach in his remaining term.