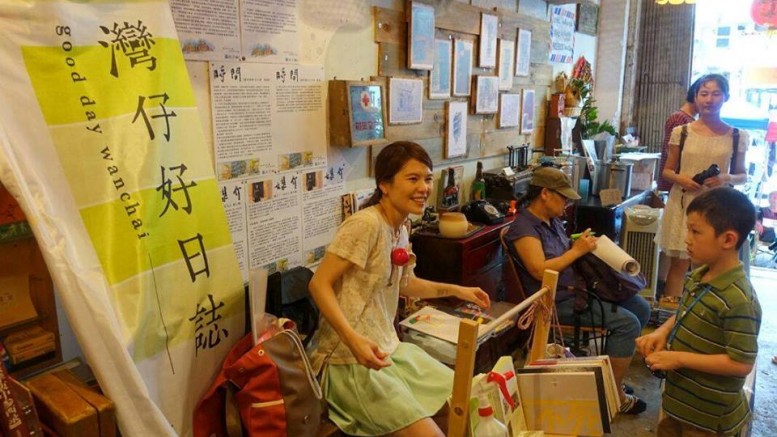 Clarisse Yeung takes a dip in politics from a community platform, Good Day Wanchai. She wins the Tai Hang seat in the November 22 district council election.

Inspired by the 2012 protests against a massive development plan in northeast New Territories, Clarisse Yeung has taken her first step in political participation. She joined a concerned group comprised of young culture workers and academics giving voices on the development of Wan Chai and city as a whole. Though conveniently dubbed by the media as an “umbrella soldier” in the just-ended District Council election, she said the idea of contesting the district poll was mooted before the Occupy Central movement. The idea was turned into action after the protests. The rest is history, or more accurate, history in the making.

Yeung, 29, who identified herself as a part-time university lecturer specialising in arts, culture and policy research and Ambassador to “Good Day Wanchai” in her election booklet, won the middle-class Tai Hang constituency seat. The constituency falls under the Wan Chai District Council. She defeated Gigi Wong, a young star groomed by the New People’s Party led by political heavyweight Regina Ip Lau Suk-yee. In her booklet, Yeung said: “It’s time for a CHANGE to re-shape Tai Hang.”

The promise of change is the common thread of the 50-odd so-called “umbrella soldiers”, referring to new, young political aspirants who have emerged to the political stage after the 79-day protests.

Their rise to the political limelight has become a sensation in the Sunday polls, which is no lacking of drama and surprises. Importantly, the emergence of a new crop of political aspirants has breathed fresh air in the political scene filled with a feeling of a loss of direction, vigour and passion. It is not surprising that new faces such as Yeung have shared the limelight with political party veterans including Emily Lau Wai-hing and Ip Kwok-him of the Democratic Alliance for the Betterment and Progress of Hong Kong in the election post-mortem media interviews.

Back to basic, talk to people

Yeung, a self-proclaimed independent, said at a DBC current affairs programme on Tuesday, said she held neutral view about political parties. But she admitted almost eight out of 10 residents she talked to during the campaign took a negative view towards political parties. Asked if she would team up with political parties at both district and territory-wide levels, Yeung said she would be happy to communicate with people from different segments of the society.

It may sound idealistic. She and her like-minded friends and colleagues are convinced the voice of people matters most. “Good Day Wanchai” is a community platform aims to inspire civic participation in the district. The approach, she said, should and can be applied to finding solutions to the host of problems facing the whole society.

Again it may seem to be simplistic and idealistic in view of the increasing complexities of the society and mainland-Hong Kong ties, which have doubled the difficulty in resolving disputes in the society. The success of Yeung and some fresh faces in their election debut attributes in no small part to their pledge and action of talking to the people, listening to what they say and winning trust from voters they will walk the talk.

Speaking to reporters on Tuesday, Chief Executive Leung Chun-ying said the government would invite young elected councillors to sit on its advisory bodies to give their views on the developments of the society.

He cannot be faulted for the promise. But that can only be the first tiny step towards listening to people from a broader spectrum of the society. And it should be given a grain of salt in view of the government’s appointment policy, which is tilted towards their political allies.

More important, there is still a huge gulf between Beijing and the Leung team and the people, in particular the younger generation over some core values and fundamental approaches in tackling a list of domestic issues and mainland-Hong Kong conflicts. Sunday’s election results show, among other things, more young people have spoken aloud they want their voices heard. They will not be contended with a mere seats in the hundreds of government advisory bodies, but real change.