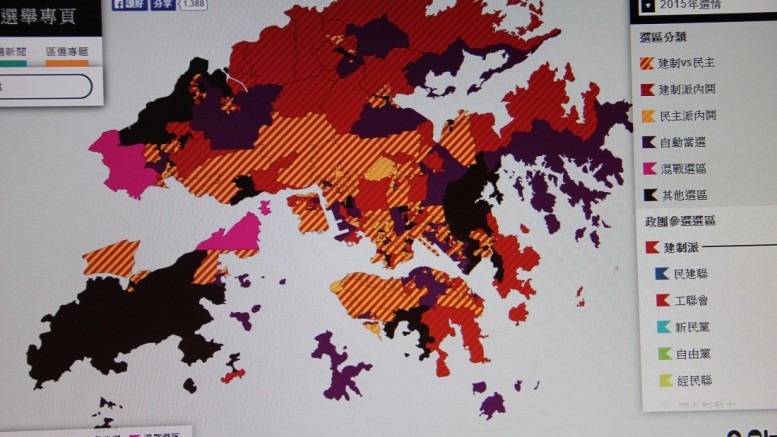 A special section in The Stand News website showing the political spectrum of candidates contesting the Hong Kong District Council election on November 22.

Conflicting signals are aplenty in the upcoming District Council elections on Sunday.

On the face of it, the overall atmosphere of the territory-wide polls is hardly feverish. True, there is no shortage of squabbles over a litany of issues in the past few months, which might have an impact of some sorts on the polls. But there is clearly no mega-sized political row that has or might emerge as the defining issue in the balloting.

There are, however, a different list of signs that are indicative of the underlying tensions in the electoral battles in districts. Vote-canvassing activities have been intensified at street level since the last few weeks. Rival political parties have already issued “emergency appeal” for backing. Political heavyweights and veterans including Legislative Council President Tsang Yok-sing, formerly DAB leader and Yeung Sum, formerly Democratic Party vice-chairman, and chairman of the Civic Party Alan Leong Kah-kit have been seen mentoring their mentees in early mornings in greeting voters. My take on three key questions:

Despite the lukewarm election atmosphere, there are reasons to believe Sunday will see a good turnout at the ballot stations. Results of a tracking poll conducted by the University of Hong Kong’s public opinion programme released on Thursday is illuminating. The poll found 71 per cent of respondents say they plan to cast their votes, compared with 66 per cent in a similar poll on the eve of the 2011 District Council elections. That seems to contradict with another finding that shows people’s understanding about the candidates available in their own constituencies has dropped. It does not.

Although some people do not care who the candidates are, more indicate their intention to vote. This is simply because “one person, one vote” election has flourished more than three decades after it landed on the enclave. Admittedly, the development of party politics has still left much to be desired. There is a list of political parties representing a wide spectrum contesting for seats in the district and legislative councils, nevertheless. They have faced with breakaway factions and new political forces. This year is no exception, making the upcoming polls lively as it has been. Figures speak.

This year saw a total of 935 candidates. Of them, only 68 are returned uncontested, down from 76 in the 2011 polls. The remaining 867 hopefuls are grabbing for the 363 seats. On average, 2.4 candidates bid for one seat. Taking into the account the fiercer infighting within both the pan-democratic and pro-government camps, this year’s polls is more competitive, which could boost turnout.

Those who said in the HKU poll they have made up their mind has markedly dropped from 37 per cent in 2011 to 30 per cent. 70 per cent remain unsure. Aside from the lack of interest in details about the candidates, the major reason for voters’ hesitation is perhaps because of the increased complexities in their thinking about who they should support. Traditionally, voters in district council polls have tended to give more weight to candidates’ performance, track records and connections with their constituencies. Those who are strong in district work, for instance, often have an edge over political stars, who are more well-known city-wide but weak in ties with residents in the relevant districts. Although this factor may still be important, it remains unclear a host of other factors may swing voters’ decision. These include political party affiliations, pro-Occupy and anti-Occupy, old veterans versus young faces. One thing seems to be certain. That there are more factors voters may have considered means the aspiration for a change among voters can prompt more to show up on Sunday.

The short answer is yes. Frustrated by the all-lose political reform fiasco and dispirited by the dismal state of the city, the sentiments of people will grow from bad to worse if voter turnout slips to a low point. Results of the polls will also have profound implications on next year’s Legislative Council elections. Political parties with more seats in district councils will be in a stronger position in terms of resources and political capital in the Legco contest. Already suffered from factional strife and loss of direction in the fight for democracy, the pan-democrats may take a severe beating if they suffer serious setback in the polls. Chief Executive Leung Chun-ying, who has made no secret his intention of seeking another five-year reign, is betting on the success of the pro-government force in shrinking the strength of the pan-democratic opposition. Rumour, which is not unfounded, is that he stands a good chance of re-election if he succeeds in bringing down the total number of the pan-democrats’ seats in Legco to less than one-third. From that perspective, Sunday’s polls can be seen as a test to Leung’s governance.