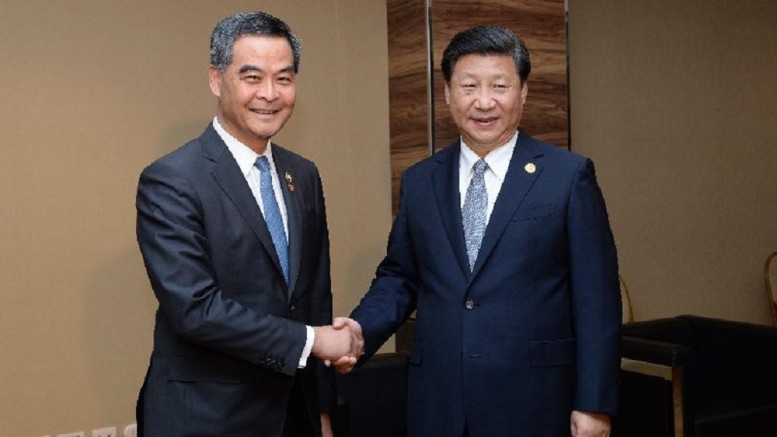 President Xi Jinping meets with Chief Executive Leung Chun-ying on the sidelines of an Apec summit in Manila.

Three points from the meeting between Hong Kong Chief Executive Leung Chun-ying and the Chinese President Xi Jinping on the margins of a meeting of the Asia-Pacific Economic Cooperation (APEC) summit in Manila on Wednesday.

Speaking to reporters after meeting with Xi, Leung said the central authorities have given full affirmation and support to him and his government in carrying out their work. He said: “The central government hopes I and our SAR government to continue to have resolute confidence and to keep up the good work to promote the development of Hong Kong.” A report on the meeting released by the official Xinhua news agency late Wednesday night, however, did not have the remarks “continue to keep up the good work.”

It is difficult to confirm whether Xi has made that remark. It looks he has as it sounds inconceivable that Leung would have put words into his boss’ mouth. If Xi’s advisers have decided to leave it out in official reports, it is probably because the President did not want to give rise to any fresh speculation about the next chief executive election. It may sound over-interpretation. But the Chinese wording of the phrase “continue to keep up the good work” could be seen by some people as an implicit backing for Leung to seek another term to continue the “good work.”

With the current term of Leung soon entering its last 19 months, the 2017 chief executive race looks set to be heated up not before too long. Xi has no alternatives but to give full support to Leung and his administration in their governance in his remaining term. Any ambiguities in semantics could fuel fresh speculation about the post-2017 political fortune of Leung. The extra caution taken by Xi could also be seen from the press arrangements. A photo session for Hong Kong media last for only one minute, during which Xi also has a casual chit-chat with Leung. It shows Xi has no important message he wants to convey directly to Hongkongers.

Indeed, Xi has given an important piece of reminder to Leung, which was not mentioned by Leung in his media session. According to Xinhua, Xi has expressed hope that the Hong Kong government can “unite and build consensus and promote harmony” in the society. If there is one thing in common between the opposition pan-democrats and the pro-government figures, it is their criticism against Leung for failure to unite the society. The pan-democrats are harsher, claiming Leung’s governing style and strategy have widened the rift in the society. Interestingly, the Government has launched a city-wide “Appreciate Hong Kong” campaign on the eve of Leung’s meeting with Xi. Officials said the campaign is aimed to heal the split in the society in the wake of the Occupy Central movement and the political reform fiasco. Even before Xi made the call for harmony, Leung has shown he is taking steps to bridge the divide in the society. But whether he has taken the right approach and given the effective dosage is another matter.

Leung had been repeatedly asked by reporters about whether he backed the Hong Kong football team or the rival China team in their World Cup qualifier on Tuesday. Even after the match ended with a goalless draw, Leung has refused to take sides when which side he supported. He has made his choice. Leung has earlier argued he would not be able to watch the match at the Mong Kok Football Stadium on Tuesday because he was scheduled to visit the Philippines for the APEC summit. Hours before the Tuesday match, Leung, who arrived Manila Monday, took time to greet the arrival of Xi at the airport. Critics said Leung chose not to show up at the stadium to be greeted by booing from his fellow citizens. They have no good reason to be cynical, claiming Leung has picked Xi and abandoned Hong Kong people when he has to choose who to entertain.