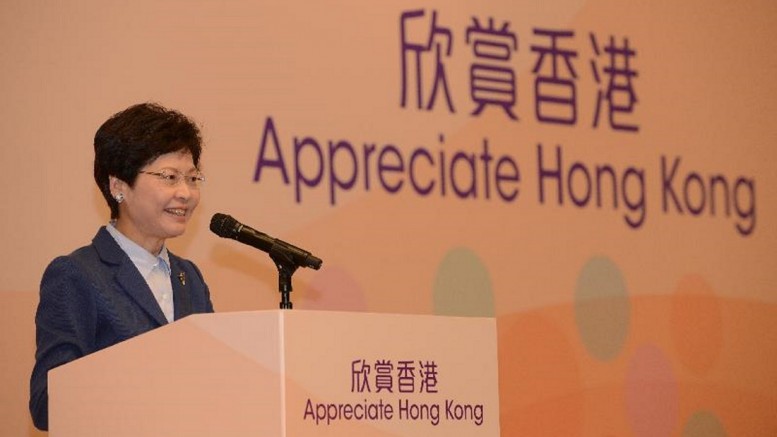 Three points from the “Appreciate Hong Kong” campaign launched by the Hong Kong Government on Monday. Kicking off the campaign, Chief Secretary Carrie Lam Cheng Yuet-ngor said it is aimed at mending the split in the society aggravated in and after the Occupy Central protests last year and the vetoing of the political reform package in June. A lot of people have lost hope, she said. It was time for everyone to appreciate the city and contribute to its development.

Six days before the District Council elections, the launching of the campaign is clearly aimed to help create an positive atmosphere in the city shrouded by an air of agitation and restlessness prevalent since the 79-day civil disobedience movement. Importantly, it may put the divisive debate about Occupy Central back on the public limelight ahead of the Sunday polls. It is unclear whether that is the government’s intention. The campaign may cause more pain to old wounds with the rival candidates seeking to raise the issue of Occupy Central movement for their own benefit in the lead-up to the balloting. The pro-Occupy candidates may criticise the campaign as a mere propaganda campaign, insisting the government has failed to address the root causes of the protests. The anti-Occupy activists, meanwhile, may capitalise on the government drive to condemn their rivals for causing divisiveness and instability in the city. Both sides have so far been refrained from playing up the Occupy row since the electioneering began – apparently because of the difficulty in assessing public mood. Coming in the final days of campaign, the “Appreciate Campaign” may cause more than a stir.

Underlying the thinking of the campaign is officials’ obsession that the Pearl of the Orient still shines. They are adamant the feeling of pessimism and lack of confidence among the populace has been excessive, if not misplaced. And the media has not been helpful. So there are a lot of positives Hongkongers should appreciate and a lot they can do to make the city even better. The irony, however, is that Chief Executive Leung Chun-ying and his right-hand woman Carrie Lam have deliberately or inadvertently joined the league of pessimists. Examples are aplenty. Speaking of his plan to set up a maritime authority at the weekend, Leung said he was unsure about whether he can do it because of legislators’ filibustering. At a Legislative Council debate last week, Lam has lamented members were wasting their time in the legislature. She expressed “pleasant surprise” for being able to find time to officiate a ceremony at the Ocean Park because a Legco meeting was adjourned – thanks to the lack of members’ quorum. The pair’s cynicism and feeling of futility oddly contrasts with the positive message they want to convey through the campaign. The question Mr Leung and Mrs Lam should answer is: is the Hong Kong glass half-full or half-empty?

It is unclear precisely when the government has had a penchant for governing by organising campaigns. Two similar campaigns have been held by the Government since Leung took power in 2012. He has also followed the footsteps of the previous Donald Tsang administration in organising a Clean Hong Kong campaign. The latest public hygiene campaign was launched in the summer. Anyone knows whether it has come to an end? Is Hong Kong cleaner after these campaigns? Similar campaigns have been held by the a range of companies and organisations from media, commercial firms and charity bodies in recent years. It is like fireworks. The glitters faded into darkness as soon as they brightened up the sky. The latest drive may be no exception. Let’s recap the much-publicised reminder of Beijing for the city’s leaders: find solutions to the deep-seated contradictions. The contradictions, left unresolved, are the cause of the uproar last year. The Occupy is the result, not the cause. Anyone seriously believe propaganda campaigns could solve the conflicts at their roots level?

Be the first to comment on "Another fireworks-like campaign, this time ‘Appreciate Hong Kong’"