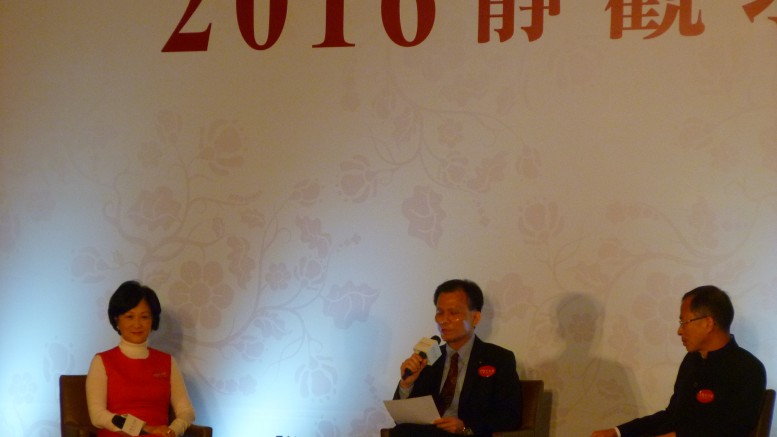 Tsang Yok-sing and Regina Ip, both tipped as contenders in the 2012 chief executive race, speak at forum.

Three thoughts from the encounter between Legislative Council President Jasper Tsang Yok-sing and legislator Regina Ip Lau Suk-yee at a forum held by the Chinese-language Master-Insight website on Monday. Apart from many similarities including HKU alumni and membership in the decision-making Executive Council, both had considered joining the chief executive race, at some stage, in 2012. With the 2017 contest less than two years to go, Jasper tried to hard to convince pundits he would not run. In contrast, Regina gave signs aplenty of her ambition for the top post.

Although both have been named as the possible names in the 2017 election, they have been cautious not to shed new light on their game plan at the forum. In a departure from her aggressive style, Regina was subdued during the conversation. Instead, Jasper took the initiative to corner her over her plan for the CE race. Half-jokingly, he told Regina to form her own government with the young talents in her New People’s Party so that they would not make early exit to the join the Leung administration. Regina did not respond directly, but just said her priority was the two upcoming sets of election, namely District Council in November and the Legislative Council next year. She chose not to pick up a fight with Jasper by putting tough questions to him. Jasper, meanwhile, wanted to have a bit of fun, but not scores.

Coincided with the theme of the forum, both have adopted a strategy of “watching quietly while seeking change” as they moved near to a juncture of their political career. Jasper has announced he would not seek another term in the legislature. He has already started setting up of his own think-tank, which he hoped could offer “doable” policy ideas to aspirants for the post of chief executive. Regina has not been so specific. But all signs are that her next stop will be the CE election. In a narrow sense, both are not likely to fully retire from the political circle. Both are finding their new roles in the post-2017 political scene. With no indication of Beijing’s thoughts and plan for the post-2017 Hong Kong, it is only wise for them to keep a degree of public exposure, watch quietly while keeping options open.

Forget about the rumours that the central government did not favour putting traditional leftist figures such as Jasper to be the chief executive. The fact is that Tsang has consistently taken up the Number One position in opinion polls on the popularity of legislatures. He might have merely tried to crack a joke. But when he asked the panel organiser why no pan-democrats were invited to the panel and then asked whether it is because he is now branded as “pan-dem”, he has said something about the profound change of his political positioning, at least in term of image, if not substance.

His image as a “liberal” pro-establishment figure is no doubt is asset for him to vie for the top post if, a big if, Beijing wants a moderate figure to be the next chief executive. That possibility, however, cannot be ruled out at this stage. For Regina, she knows that she has a lot of work to do to convince Beijing and her fellow citizens she can deliver what she has underlined as the essential qualities of a good leader. At the panel session, she said leader must be able to adopt soft power to govern, but not just rely on authority. Isn’t that a veiled critique of Leung Chun-ying? You bet.

Be the first to comment on "When Regina meets Jasper"