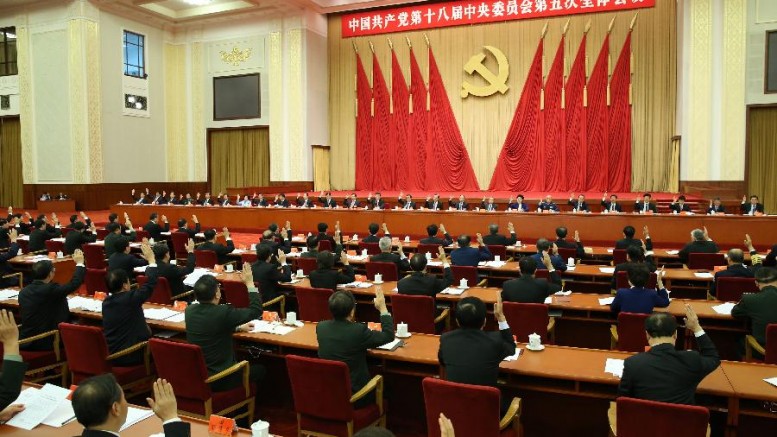 Whenever President Xi Jinping talks about the economy, he likes to flag two concepts: “top-level design” and “innovation.” The Chinese strongman obviously sees no contradiction between the two concepts. Just as the Chinese Communist Party leadership sees no contradiction about the fact that as the economy integrates with the global marketplace, Beijing still feels duty-bound to maintain the Soviet tradition of turning out five-year plans.

The main guiding spirit and strategies of the 13th Five Year Plan (13FYP), which covers the years 2016 to 2020, was endorsed by the four-day Fifth Central Committee Plenum which ended November 29. However, the full details of the Plan will not be released until the National People’s Congress next March.

Priority of economic development in the coming five years is being given to innovation, which, according to the Plenum communiqué, “occupies a core position in the whole scheme of national development.” Apart from technological innovation, the CCP leadership also seeks theoretical, institutional and cultural innovation. Examples given by the Communiqué include rendering China into a “Cyber [world] power,” as well as the adoption of the “Internet plus action plan” and implementing the National Big Data Strategy.

While no figures have been given for R&D expenditure during the 13FYP, it is understood that it will be in the region of at least 2.5 percent of GDP.

And despite Premier Li Keqiang’s advocacy of private entrepreneurs becoming pacesetters for the high-tech development, Xi has gravitated toward the Soviet model of the state sponsorship of innovation. Major initiatives – including which areas to specialize in – would be made by party, government and military departments. Thus the communiqué reveals that the Plan will involve “the implementation of a group of national major high-tech schemes” as well as the building of large-scale high-tech labs.

Of particular significance is the Plan’s emphasis on a “development strategy [based on] profound military-civilian synergy.” Here, Xi is continuing with the Mao Zedong tradition called pingzhan heyi, or “the synthesis of the requirements of peace and war.”

The communiqué highlighted the “symbiotic development of economic construction and national-defense construction.” Since Xi took over power three years ago, there has been closer cooperation and synergy among laboratories and R&D facilities in the People’s Liberation Army (PLA), state-owned enterprise conglomerates, as well as top high-tech zones such as those in Shenzhen, Shanghai, Dalian and Beijing’s Zhongguancun District. Analysts have indicated that the extraordinary weight that Xi has given to “military-civilian integration” reflects the influence of his military advisers, many of whom, like Xi, are princelings or the sons of party elders.

In his speech explaining the 13FYP at the plenum, Xi reiterated his advocacy of “top-level design” and “Party leadership” over economic development. The prominent role that the President has played in providing guiding principles to the plan has further confirmed the sidelining of Premier Li, who at least in theory is in charge of the economy. At the Fifth Central Committee plenum in late 2000 that was dedicated to the 12th Five Year Plan (2001 to 2015), it was then-premier Wen Jiabao, not ex-president Hu Jintao, who gave a detailed explanation of the economic blueprint.

Premier Li’s approach to high-technology and innovation is to encourage new start-ups run by young scientists and professionals, who include “returnees” from abroad. During his inspection of high-tech zones in Beijing, Tianjin and Shenzhen the past year, Li encouraged young entrepreneurs to emerge as “China’s Bill Gates and Steve Jobs.” The big question facing China’s quest for innovation is: “Will 21st century Chinese Steve Jobs feel comfortable working in government-designed, state-financed laboratories?”

Since coming to power in the past three years, Xi has arrogated to himself powers and functions which belong to the portfolios of Premier Li and other members of the Politburo Standing Committee. This goes against the dictum, put forward by late patriarch Deng Xiaoping in the early 1980s, that China be run by a collective leadership. Xi’s relentless power grab – and his apparent revival of the Maoist paradigm of the yiyantang (“one-voice chamber”) – seems to run counter to the principles of “theoretical and institutional innovation” championed by the party’s liberal wing.