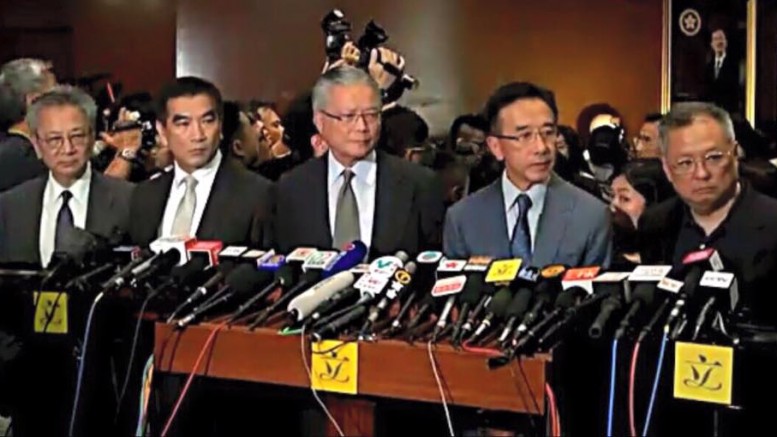 A chorus of calls against the re-election bid of Chief Executive Leung Chun-ying seems to have emerged recently as Chinese Communist Party leaders begin to put the candidacy of the next chief executive on the agenda.

There might have been doubts about whether Liberal Party leader James Tien Pei-chun could speak for his comrades when he set out the criteria for picking the next chief, dubbed as ABC, which means “Anyone but CY (Leung),” a few months ago.

Tien’s bad blood with Leung is hardly surprising, indeed nothing new. He was given a boot by the Chinese People’s Political Consultative Conference last year after he called on Leung to consider tendering his resignation because of his governance failure and unpopularity. The united font body has ruled Tien for having acted against their resolution of backing the governance of Leung.

If there had been any doubts about Tien’s political weight in the party, they could be put to rest this week after Felix Chung Kwok-bun, the party’s chairman, said at TVB Pearl’s Straight Talk programme he did not support Leung’s re-election.

Chung is adamant Leung has scored a fail on almost all important aspects. Politically, he said Leung has not only failed to unite the society, but further polarised it. Economically, Leung has not been able to deliver concrete results, Chung said.

The Liberal chief, who represents the textiles functional constituency, has also voiced out fears about government intervention in the economy after Leung said in an interview the city’s “positive non-intervention policy” was outdated.

With the 2017 chief executive race still almost two years to go and that Leung has not yet indicated his re-election bid, the no-unambiguous stance of Chung and Tien against Leung’s bid for his second term is intriguing. It is apparently clear they have also reflected the mainstream view of the Liberal Party, which is still seen a pro-establishment force.

Their refusal to give Leung the benefit of doubt is indicative of the depth of their feud,

At a time when there are no signs Beijing has already hand-picked the next chief executive, the Liberals’ dissenting vote against Leung might have been aimed to give an early message to Beijing for them not to anoint Leung for another term.

The Liberals’ calls for “no second term” for Leung came about the time a pro-establishment heavyweight, Tsang Yok-sing, who is President of the Legislative Council, has intensified his attacks against Leung.

Tsang has in recent interviews ridiculed Leung for his blunders in handing the removal of two ministers, namely Tsang Tak-shing and Tang Kwok-wai. In a flurry of veiled criticism, Tsang has also expressed dismay with the governance and ruling style of Leung. But Tsang has stopped short of saying whether he would support Leung’s re-election bid.

The writing is on the wall, however. Some prominent pro-establishment politicians could not wait to send a sharp reminder to Beijing that they have to bear the political price if they decide to back Leung for another term.

It could also be a message to Beijing for them not to take for granted that their friendly political parties in the city would back whoever they choose as the chief executive.

Given Beijing has not yet decided on the candidate, Chung could argue they have no obligation as being a member of the pro-establishment camp to support Leung’s re-election, at least for now.

It is no secret the Liberal Party and some pro-government figures such as Tsang are at odds with Leung. Their recent high-profile moves firing salvos against Leung do not seem to have been coordinated.

That the anti-Leung voices from the pro-establishment camp have indeed been uncoordinated could be even more damaging to Leung, who already faces with a hostile pan-democratic opposition. Put bluntly, Leung faces not only foes from outside but inside.”

Be the first to comment on "Leung faces foes inside, outside"