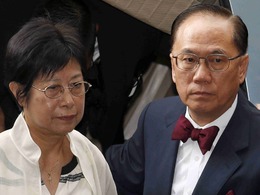 The fate of former chief executive Donald Tsang Yam-kuen seems to have hung in the air despite his high-profile appearance at the military parade in Beijing last week.

Television news footage showed Tsang, ridiculed by some Chinese press as “greedy Tsang” for his alleged misdemeanours when he was in office, chatting with senior leaders in jovial and relaxed mood.

That he was on the list of the 300-odd VIPs picked by Chief Executive Leung Chun-ying and the central authorities to attend the parade has been seen as a possible sign that his name has been cleared.

On the face of it, there’re some truth in the assumption. Beijing would have dropped him from the guest list to avoid embarrassment if he was or likely to be taken to the court for corruption charges.

But if investigation has already been completed and that there is no prima facie case, it is inconceivable that a decision to put an end to the case has not been taken at an earlier time. Ostensibly, there are no merits keeping a lid on the case. Doing so will only fuel speculation and cause more damage to the image of Tsang.

The more plausible scenario is that a final decision has indeed not yet been made. Press reports said earlier the Government is seeking independent legal advice from abroad. That seems to be the last piece of the jigsaw for the Government to decide the fate of Tsang.

With the case remains seemingly inconclusive, there is practical no alternative for Leung and Beijing in contemplating whether or not to invite Tsang to the September 3 party.

An omission of Tsang for whatever reasons will no doubt fan rumours about his case.

It is highly likely that Tsang would have already got a tip-off about the outcome of the probe – one way or another. He has also had no alternative but to accept the invitation and be a happy guest as if nothing has and will happen to him.

Like the invitation, the body language of Tsang may not be relevant.

It would be more reliable to read the tealeaf than to decode the fate of Tsang from his facial and body gestures before camera in his Beijing trip.

Cases aplenty that disgraced senior Chinese Communist Party officials still shone in public limelight days or even hours before they fell from power. Bo Xilai, former Chongqing mayor, was still cracking a joke with reporters at a National People’s Congress plenum. His stardom grew dim at a post-plenum press conference held by the then premier Wen Jiabao. More recently, a vice mayor of Tianjin, who led a leading team on the catastrophic explosion, was sacked for graft probe one day after he convened a crisis meeting.

It should not come as a surprise therefore if Tsang plunges onto the ground and is taken to court soon after being offered a high place at the Tiananmen Square.

True, there are no doubt complexities in the Tsang case. That it has taken more than three years for investigation could be seen as evidence that allegations of misconduct or even graft may not be totally groundless.

And at a time when a Xi Jinping-led campaign against corruption in the mainland is still underway, both the central authorities and Leung cannot afford leniency and clemency to Tsang.”